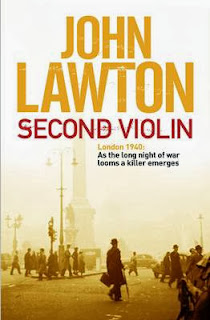 The story starts on the day Hitler is welcomed back to Vienna in triumph and ends after the internment of "aliens" living in Britain and the start of the bombing campaign. Frederick Troy, the son of a wealthy newspaper magnate has shocked his family by deciding to become a policeman. After spending a few years on the beat, he has risen to be a Detective Sergeant in the prestigious Murder Squad. Well thought of by his boss, DS Onions and most of his colleagues, Troy is dismayed to be allocated the task of using his specialist knowledge in helping the Special Branch with the round up of aliens living in London and sending them to internment camps. He finds he recognises many of the names on the list from his old days as a constable.

Fred's brother, Rod is a journalist and has been covering events from Vienna and Berlin. He was in Vienna for the Kristallnacht, when many Jews realised that they had to leave if they were to have any chance of saving their lives and then he is forced to leave as an undesirable. But Rod is not British, he is Austrian. Born on the continent, and although his parents, Russian Jews, are naturalised British and his siblings are British, somehow, Rod never got around to the paperwork, and he is also now on the list of “aliens”.

Frederick is called to the scene of a suspicious death of a Rabbi and realises that it is the latest in a series of sudden deaths of Rabbis in the capital. He wonders whether they are being murdered, but accidents and sudden death are a daily event as London's lights are turned out as the country prepares for conflict. Troy's personal life is complicated by his relationship with two totally different women. The charismatic, danger loving, Zette, a mathematician, and Kitty, a cockney police sergeant, who happens to be the daughter of Troy's colleague in the round up task - Inspector Stilton. Troy's professional life is also complicated by the fact that he now reports to Chief Inspector Steerforth, a man in a hurry, who make it clear from the outset that he feels Troy's privileged beginnings have influenced Troy's advancement. The deaths of the Rabbis runs through the novel, linking people and events until the inevitable end amongst the rubble of a bombing raid.

The terror and brutality of life, whether in Vienna or London, during this period is brought vividly to life. The resilience of people to rebuild after they have lost, or have had everything taken away from them whether by personal tragedy, by war or by being displaced to a foreign land, is accurately depicted. An interesting story, building on well documented facts and helping history to come alive with the aid of the stories of individuals' lives and experiences is very believable. Recommended as a good read.