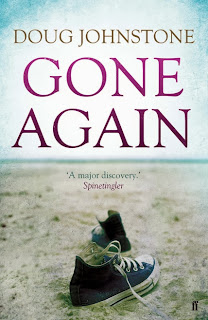 GONE AGAIN is a stand-alone suspense novel by the author of last year's HIT & RUN.

It opens with Mark Douglas, a photographer for the Edinburgh Evening Standard, standing on Portobello Beach in a gale, trying to capture the perfect picture of a pod of whales swimming dangerously close to the shore.

Rough grey swells were chopping up the firth, where a coastguard speedboat was zipping and turning, trying to guide the whales towards open water. Black fins darted and dipped, too many to count properly, but at least forty.

Mark is interrupted by a call from his son's primary school. His wife Lauren hasn't arrived to collect Nathan - could he come to get him?

This isn't the first time Lauren has gone AWOL - the last time was during a bout of postnatal depression - and Mark is instantly concerned that her disappearance is related to the fact that she is expecting another baby. As the minutes turn into hours, it becomes obvious to Mark that she is in real danger. The police, as always, cannot act until a longer period of time has passed.

Johnstone is good on the vacuum left by a missing person. What should Mark tell his son? Who will do the school run? Who will look after Nathan when Mark is speaking with the police? It is these minutiae which make GONE AGAIN a realistic and satisfying read.

Mark is under incredible stress from the moment Lauren disappears. His anxiety expresses itself in very 2013 ways - checking Lauren's Facebook and Twitter accounts once an hour rather than going to friends and family. Mark and Lauren have few connections outside of work and are remote from their friends. Mark's only adult ally is his mother-in-law Ruth, but their relationship is far from uncomplicated.

As with all good suspense novels, we are never quite sure where we stand. Mark seems like a nice guy, but he has some ugly sides to his character which are drawn out by the stress of Lauren's disappearance. As he pursues his own suspicions it's not clear how much he is driven by paranoia and jealousy. The plot is cleverly set up, and appeared to me to be building inevitably towards one of two conclusions before taking a surprising left turn.

Dads in particular will find that Mark's relationship with his son Nathan is touchingly drawn, their closeness mainly expressed through Star Wars cartoons and the Nintendo DS. Mark is constantly questioning how much to tell Nathan or whether it is kinder to leave him in ignorance.

Mark said she was away working for a few days [...] Nathan wanted to know why she hadn't called though. Maybe her phone needed charging up, another familiar scenario, she was always forgetting. With each little lie, he felt the universe closing in on him, the wind outside trying to make him pay for what he said by pushing the windows in.

Read another review of GONE AGAIN.

I like the sound of this, thanks for the review :o)