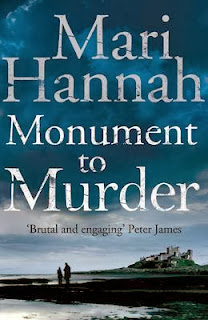 MONUMENT TO MURDER is Mari Hannah’s fourth book and it is glorious. London-born, but now living in Northumberland, Hannah is a former probation officer and a film/television scriptwriter. She has published four books in two years and has already either won awards or been shortlisted for them. In short, this is one talented lady and her fabulous book had me focused and fascinated from cover to cover. And I didn’t guess who the murderer was either!

The story follows two separate plots but they are linked, as the people involved in one are friends of the people in the other, so you have to concentrate or you could get confused. One story line follows DCI Kate Daniels – the protagonist in all four of Hannah’s books - who has her work cut out when two unidentified skeletons are uncovered on Bamburgh beach, near Alnwick in Northumberland. The remains turn out to be girls, aged 10 and 15 years, and both are found wearing imitation pearls. As if it isn’t hard enough, it is snowing and the terrible weather conditions make things almost impossible for Kate and her team, as the crime scene is a fair distance away from home. Driving is dangerous, so they have to stay in a local B&B and it is not very comfortable.

Meanwhile, the second story follows Emily McCann, a prison psychologist. Recently widowed, Emily has just returned to work and is struggling to regain some sort of normality in her life. This, however, is not easy, as one of the inmates, sex offender Walter Fearnon, is obsessed with her. He is due for release and takes great pleasure in telling Emily what he would like to do to her. Emily is driven out of her mind with worry and, when her daughter disappears, she can only imagine the worst.

A well-written and interesting read, MONUMENT TO MURDER is far more than just another police procedural. The characters are well developed and attractive, with interesting lives outside of their jobs. None of them have moaning partners, complaining about their hours, and the way both story-lines are intertwined really keeps you on your toes. Hannah is a very welcome addition to the growing group of talented British crime fiction authors and I am looking forward to seeing what the future brings her.