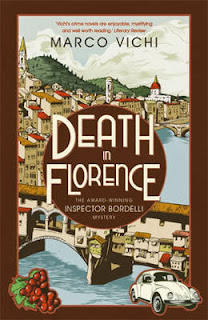 Florence, October 1966
Bordelli's first thought as he wakes up is of the woman who has left him; his second is of the thirteen year old boy who has been missing for five days. Before dawn Bordelli is roused out of bed by Botta who has come to take him on a mushroom hunt in the hills above Florence. Walking these wooded hills takes Bordelli back to his time as a partisan in the war but part of him wishes he could just enjoy the beauty of the place as it is now. Back in the city and on his way into police headquarters, Inspector Bordelli reviews the case of the missing boy: an afternoon of heavy rain, the boy's mother unable to start her car to collect him from school and his barrister father caught up in the traffic and arriving late. By then the boy had gone, last seen running through the streets with his satchel shielding his head from the downpour. No one has seen him since. Bordelli's boss is beside himself with the lack of progress. There is hostile press coverage and pressure from influential friends of the boy's father. They must find the boy soon. But Bordelli and his young colleague Piras share the grim intuition that the boy is already dead. The only resolution of the case will be to find his body and then his killer. And next morning a hunter does indeed find the body of the boy, buried in a shallow grave in the wooded hills of La Panca, those very same hills that Bordelli had walked with Botta. Bordelli returns to the grave site and starts his own search for clues. He spirals deeper into the woods from the grave, reminiscing, imagining loving a woman and retiring to these hills to dig vegetables and raise chickens. His imaginings and search are interrupted by the mewing of a kitten, a tiny survivor of four, staggering amongst the bushes. Bordelli takes pity on it. He picks it up and notices a piece of paper close by. It is a telephone bill for a Florence butcher's shop...

DEATH IN FLORENCE is the fourth in Marco Vichi's Inspector Bordelli series and a prizewinning novel in his native Italy. Against the backdrop of Bordelli's beloved Florence and its surrounding wooded hills, a schoolboy goes missing. His body is later found in a wooded shallow grave, bearing the marks of multiple rape and strangulation. The hunt for the killers proves difficult and exhausting for Bordelli and his young colleague Piras who are forced to work with paper-thin evidence, intuition and obstinacy. In the midst of all of this, the River Arno rises and its appalling 1966 flood sweeps through the city, an event which Vichi describes in vivid detail. As the waters recede and the city's losses and ravaged buildings are revealed, so too are the killers' identities. But can Bordelli find the proof that he needs to bring justice for the dead boy?

Vichi's characters are vivid. He conjures up the fifty-six-year-old detective and his surrounding broad circle of friends which ranges from scientists to ex-prostitutes and thieves (the phenomenon that is Botta) with a rounded truth. In this book, perhaps exhausted by his years of policework, Bordelli seems more obsessed than usual with looking for a beautiful woman to share his life as he heads towards retirement. As always, his memories are of Italy's fascist and wartime past and his own part in it, but he also has a keen and accepting eye for life in 1960s Florence. For readers who enjoy a good slice of social history in their crime fiction, Vichi's books are a must. (They come complete with occasional footnotes to explain popular and historical references.) There is no flinching from brutalities but the pages are filled with life. With an atmospheric translation by Stephen Sartarelli, who also translates Andrea Camilleri's “Inspector Montalbano” books – not forgetting the loving description of the food on Bordelli's plate which would rival that on Montalbano's – fans of the Camilleri series may do well to visit Vichi's world of 1960s Florence.

Wonderful review Lyn. I started reading this series simply because it is translated by Sartarelli, but now appreciate WHY it is that Sartarelli translates the novels. Some of the social justice themes are challenging, as is some of the history, but the novels deserve a much wider English language readership.
Beth