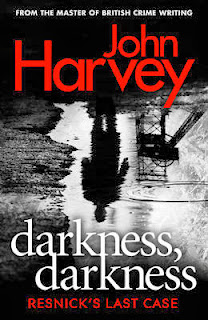 It seems a number of series are finishing up at the moment, including John Harvey's Charlie Resnick series (though Cold in Hand broke my heart). From The Bookseller:

The novel, Darkness, Darkness, is set in Nottingham, and sees Resnick revisiting a cold case focused around the 1984 miner's strike.

Sandon said: "John lived and worked in Nottingham during the strike and witnessed the strife first hand.  His depiction of the violence and anger which not only divided a community but set brothers, husbands , wives and entire families against one another is both wholly authentic and riveting. I’m extremely sad to know that this is Resnick’s last appearance."

It is sad, Karen, when a great series ends... Thanks for sharing this info.