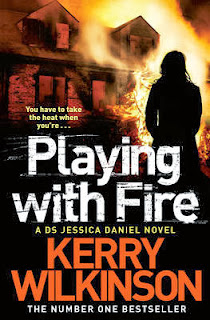 PLAYING WITH FIRE is the fifth book in Wilkinson’s series featuring his detective Jessica Daniel. It is a highly entertaining read and, although it is the first in this series that I have read, I didn’t feel as if I were missing anything. Although, of course, it would be much better to read all five books, as a large part of the interest is Jessica’s life and personality.

The story follows Jessica’s dealings with Martin Chadwick, a man who has recently been released from prison. He has served seven years for burning down a pub and accidentally killing somebody who was asleep inside. Now crushed and remorseful, Martin breaks down in tears in front of Jessica and says he is truly sorry for what he has done. Things do not end there, though. Anthony Thompson, the father of the teenager that Martin has killed, is still out for revenge and an article is printed in the local newspaper full of his venom. Then, when somebody sets fire to Martin’s house and he is nearly killed, the finger is naturally pointed at Anthony. Anthony denies all wrong-doing and Jessica is tasked with finding the guilty party. To make matters worse, Andrew Hunter, a private detective, gets in touch after a teenage girl he has been asked to follow commits suicide. Jessica thinks there could be a link between the fires and the suicide and has to try to keep her emotions under control, all the while planning her own future with her boyfriend and attempting to deal with her insecurities over her impending marriage. Stressful or what?

Kerry Wilkinson has a degree in journalism and works for the media. He self-published his first Jessica Daniel book and, after its success as a Kindle e-book, has gone from strength to strength. His work is engaging and absorbing and thoroughly enjoyable. I was particularly moved by his vivid description of the thoughts and actions of one of his characters, who wakes up to discover their house on fire. It is so life-like you feel as if you are trapped there with them. Superb. If you like a fairly dark read but also enjoy getting to know your main characters as if they are friends of yours, then you are going to love this book and, presumably, the earlier books in the series as well.