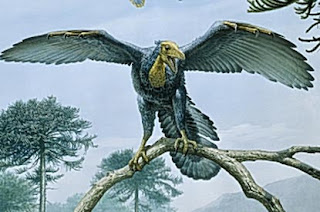 I spotted this article in the Evening Standard on my way home after my day out at the British Library's Crime Across the Continent event:

A fossilised dino-bird that confirmed Darwin's theory of evolution is to be the centrepiece of a new £2m gallery at the Natural History Museum, it was confirmed today.

Archaeopteryx lithographica, a 147 million-year-old fossil with both bird and reptile features, will go on display at The Treasures Gallery.

Usually I would have read the article and passed on without much of a second thought but having just read The Dinosaur Feather by Sissel-Jo Gazan it struck a chord. If you read Maxine's review you'll see why.

The Dinosaur Feather, ably translated (as usual!) by Charlotte Barslund, is an unusual book but one that despite its scientific background is not too heavy and I read it quite quickly. Gazan is one of a relatively small but increasing number of Danish crime authors available in English translation.

You can read more about Dino-Birds at the Natural History Museum website.
Posted by Karen (Euro Crime) at 10:00 am

Nice picture - and good spot! Although I had mixed views about Dinosaur Feather (a better edit would have helped), I hope she writes more books as I think she's got talent.