From Norway to Norfolk: Staalesen & Bartlett

On the 18th, Petrona and I trundled off to the British Library for the Crime Across the Continent study day. The last session of the day, included:

Gunnar Staalesen and Don Bartlett (courtesy of the Royal Norwegian Embassy), From Norway to Norfolk; author and translator in conversation.

Here're my notes from the session. They are a bit illegible at times so I apologise for any errors in transcription. 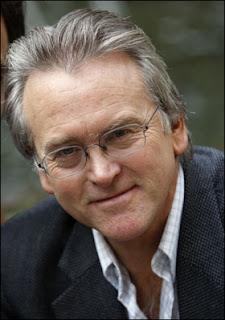 GS writes PI novels in the classic style. When he was 11/12 he read his first grown-up book, The Hound of the Baskervilles. Sjowall and Wahloo were a watershed between the old and new crime writing. Reading US authors made it possible for a young, left-wing, Norwegian writer to write detective stories. Two great plotters were Agatha Christie and Ross MacDonald. Ibsen was a good Norwegian writer.

[GS's lead character is called Varg Veum] Varg = wolf, Veum = Sanctuary/holy place, outlaw in norse. Veum is an ordinary family name, Varg not so much in use!

He wrote two police-procedurals (like Sjowall and Wahloo) before starting the Varg Veum series (which are hugely successful in Norway; his birthday is celebrated and there is a statue in Bergen where they are set). He's currently writing no. 16.

He didn't choose a social worker profession for VV so he could write social criticism but rather he wanted a character who would want to get to the bottom of something and would protect the "losers", the "weak".

Modern Scandinavian crime writers are on the left side of politics.

He doesn't feel there is a Norwegian crime style but there is a Scandinavian. However nature is more apparent in Norwegian crime novels as the cities are very small eg Bergen is surrounded by mountains. Norway is the most egalitarian county in Scandinavia as there is no nobility; oil has changed society.

He knows exactly when VV's birthday is - 15/10/42 - which is celebrated every year in Bergen. The current book is set in Spring 2002. He wants to get to 20 books in the series. Takes a year to write but three to six years for the ideas to become useable. He mostly knows the end of the book before beginning it. 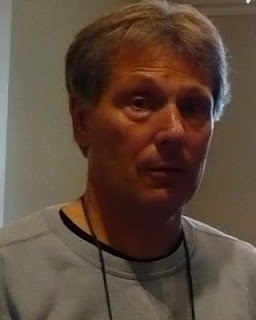 DB says that GS's books are a translator's heaven: short, linear, a wonderful central character and full of humour.

The point was raised about the fact that DB is the third translator to work on GS's books and how did he tackle that? He looked at the earlier books for technical things like names and ranks to keep a consistency over the series.

DB was asked how he coped with dialect used by the minor characters. The high risk approach of translating dialect is using a recognisable English or American dialect eg Brooklyn in the Camilleri books. DB favours the low risk approach by just thinking how they might speak in English.

DB visited Bergen before translating The Consorts of Death and walked around street by street so he knew exactly where certain events took place.

DB limits himself to 4 translations a year. This year he did 2 Jo Nesbos and will be doing another 2 in 2012.

GS said he had no influence on the Varg Veum tv series. Big changes were made to his stories eg in one episode all that was left of the original was half of the title, however it was good pay for half a title!

Cold Hearts, number 15 in the series is to be published next February by Arcadia and follows on from The Consorts of Death, both translated by Don Bartlett. I'm really looking forward to it.

Reviews and Gunnar Staalesen's bibliography (of titles in English) can be found on the Euro Crime website.
Posted by Karen (Euro Crime) at 10:14 am

Great write-up, it brings it all back to me! This was by far the best part of the day, for me (the rest of it was good, too).

I'm looking forward to the next Varg Veum book, too - I've very much enjoyed the three I've read so far (there is a fourth that was translated a long time ago, At Night All Wolves are Grey, but it is unobtainable anywhere so far as I can find out).

Very interesting information, Karen! Thanks very much for sharing!

For me too, it was the best part of the day. Had I known there were other enthusiast readers (rather just than too-serious researchers) at the rather chilly British Library, I would have chatted to them rather than listening to the socio-political impacts of Euro crime fiction.

Having said that, the speaker on the Akunin novels did tell me that she believed that popular appeal and good story lines can help popularise a book. I am also not sure whether getting a Georgian author to kick off the day by saying he is not a crime writier is the best possible start.