I've mentioned the increasing number of books set in Tudor times. M J Trow, author of 2001's Who Killed Kit Marlowe? A Contract to Murder in Elizabethan England and the crime series featuring Lestrade and Maxwell (the latter being very popular in my library) has begun a new series featuring one Christopher "Kit" Marlowe under Severn House's Creme de la Crime imprint. The first book, Dark Entry came out in May and the second, Silent Court, will be out in December. 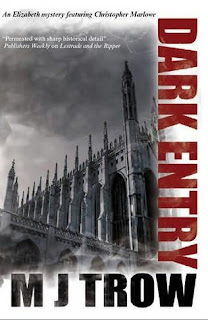 Cambridge, 1583. About to graduate from Corpus Christi, the young Christopher Marlowe spends his days studying and his nights carousing with old friends. But when one of them is discovered lying dead in his King's College room, mouth open in a silent scream, Marlowe refuses to accept the official verdict of suicide. Calling on the help of his mentor, Sir Roger Manwood, Justice of the Peace, and the queen's magus, Dr John Dee, a poison expert, Marlowe sets out to prove that his friend was murdered . . .

Severn House's books are stocked in libraries (and the slightly cheaper trade paperback and Kindle versions appear to be available a few months after the hardback release).
Posted by Karen (Euro Crime) at 7:28 pm

Yes I really fancy this one too.