It's been a seven year wait for The Silver Stain the fourth in Paul Johnston's Greece-set Alex Mavros series. In the intervening years, MIRA reissued the paperbacks of the first three, retitling the first, A Deeper Shade of Blue as Crying Blue Murder. The Silver Stain will be published on 29 December (UK) and 1 April 2012 (US). 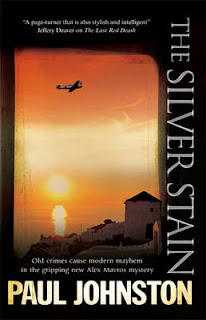 Hired by a Hollywood film company to trace a missing employee in Crete, private investigator Alex Mavros is plunged into a vortex of hatred. The company is shooting a movie about the invasion of Crete by the Germans in 1941 - and their activities are stirring up old resentments among the islanders. The bitterness of the past bursts into the present when one of the film's consultants is found dead, hanged by the neck. Suicide - or murder Mavros investigates and is drawn into an ever-widening conspiracy. 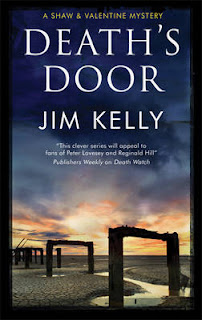 On a hot August day in 1994, 76 holidaymakers travel to an island off the North Norfolk coast. Only 75 return alive - a young man is murdered, the case left unsolved. Twenty years later, using state-of-the-art forensics, the DNA results of a bloodsoaked towel prompts DI Peter Shaw to summon all 75 original suspects to a mass screening. but one of them, the beautiful Marianne Osbourne, is found dead in her bed. Is there a link to the 1994 murder DI Shaw and DS Valentine become immersed in the dark secrets of an isolated community.

These books should be easily available in your public library system. If you prefer to buy then there's usually a cheaper trade format edition a few months after the hardback release.
Posted by Karen (Euro Crime) at 3:21 pm

Thanks for the coverage! Paul