A Death in Summer - Cover Opinions

This week's selection for "cover opinions" is the US and UK covers for Benjamin Black's A Death in Summer, the fourth in his Quirke series, which is set in 1950s Dublin.

The US editions are on the left, the hardback edition is out now, and the trade paperback (below) will be out in March; the UK edition (on the right) is also already available.

So what are your thoughts on the US (LHS, below), and UK (RHS) covers? Which would entice you to pick the book up if you were not familiar with the books of Benjamin Black?

If you have read it, how well do the covers match the story?

NB. Elergy for April was given the same cover opinions treatment last year. 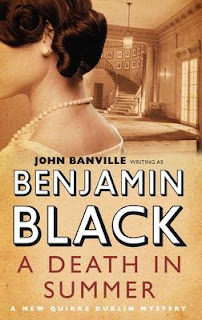 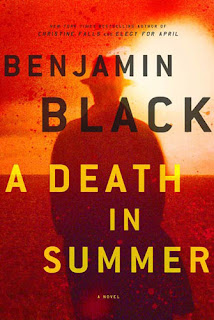 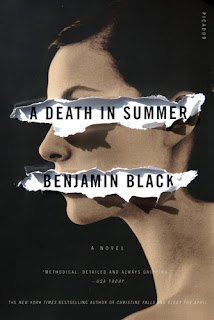 Blurb: When newspaper magnate Richard Jewell is found dead at his country estate, clutching a shotgun in his lifeless hands, few see his demise as cause for sorrow. But before long Doctor Quirke and Inspector Hackett realise that, rather than the suspected suicide, ‘Diamond Dick’ has in fact been murdered.

Jewell had made many enemies over the years and suspicion soon falls on one of his biggest rivals. But as Quirke and his assistant Sinclair get to know Jewell's beautiful, enigmatic wife Françoise d’Aubigny, and his fragile sister Dannie, as well as those who work for the family, it gradually becomes clear that all is not as it seems.

As Quirke’s investigations return him to the notorious orphanage of St Christopher’s, where he once resided, events begin to take a much darker turn. Quirke finds himself reunited with an old enemy and Sinclair receives sinister threats. But what have the shadowy benefactors of St Christopher’s to do with it all?

Against the backdrop of 1950s Dublin, Benjamin Black conjures another atmospheric, beguiling mystery.

I haven't read it, but I don't think much of any of these covers. I dislike the two US ones (esp the "torn face" woman), so I suppose I'd have to go for the UK cover, which is quite nice apart from the woman being cut in half!

These covers all seem to tell a different story, they are very different.
Ann

I like the UK cover, with the U.S. top one coming in second.

But in the UK cover, why is half of the woman's face lopped off?

This is a common theme of mystery covers, even in a beautiful cover on City of Dragons by Kelli Stanley.

I haven´t read the story, but I prefer the UK cover.