The BBC has released more information about the recommissioning of Sherlock:

"Sherlock was the hit of the Summer."

Talking of the Sherlock recommission, co-creators, Mark Gatiss and Steven Moffat, say: "We've been overwhelmed by the warmth of response to our new Sherlock Holmes and John Watson and can't wait to take them on three new adventures next year. There'll be baffling new puzzles, old friends and new enemies – whether on two, or four legs. And we might well be seeing the cold master of logic and reason unexpectedly falling. But in love? Or over a precipice? Who can tell?"

In the meantime the DVD of the first series of Sherlock is available to buy today, online price is around £13. The special features include an unaired 60 minute pilot. 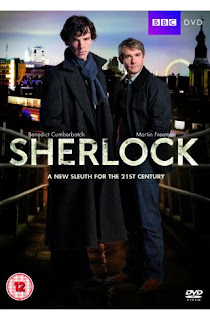 John Watson: doctor, soldier, war hero, lost soul. Fresh from fighting the war in Afghanistan, a chance encounter brings him into the world of Sherlock Holmes: loner, detective, genius. A woman in pink lies murdered in an abandoned house. The fifth victim of a seemingly motiveless killer. Inspector Lestrade is the best Scotland Yard has got. But he knows he’s nothing compared to a young man called Sherlock. Sherlock can tell a software designer by his tie, an airline pilot by his thumb. He has a unique analytical brain unlike anyone else in the world, who earns his living and staves off boredom by solving crimes. The weirder and more baffling the better…

The two men couldn’t be more different, but Sherlock’s inspired leaps of intellect coupled with John’s pragmatism soon forge an unbreakable alliance. Across three, 90 minute, thrilling, scary, action-packed and highly entertaining television movies, Sherlock and John navigate a maze of cryptic clues and lethal killers to get at the truth.

The world’s favourite detective has come out of the fog. With sparkling scripts and unforgettable performances from the two leads, this is Sherlock for a new generation.
Posted by Karen (Euro Crime) at 8:55 am

Loved the series! I think hearing the actors commentate on episode three would be interesting. I heard it was very cold while filming. I wonder if they mention that?