I posted back in March about the rise of Tudor-era crime fiction and here are a couple more titles to add to the wish list, if you like that sort of thing, both published this month: 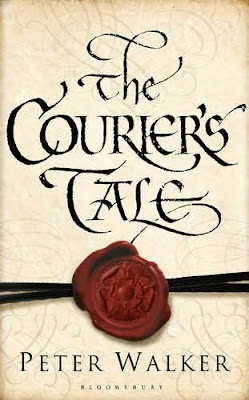 The Courier's Tale by Peter Walker
Reginald Pole, diplomat, friend of scholars, cardinals and artists, and cousin to Henry VIII, is first seen stealing into the Medici chapel at dead of night to catch a forbidden glimpse of Michelangelo's masterpiece of funerary sculpture. But as the king's representative in Italy, and an admired scholar himself, it falls to him to make the case for Henry's divorce from Katherine of Aragon. And it falls to the hapless Michael Throckmorton to become Thomas Cromwell's courier to Pole in Rome. In Peter Walker's imaginative novel, in which two worlds, increasingly opposed, are beautifully evoked, we see these famous events that saw England become a Protestant nation through the eyes of the luckless courier. The dubious privilege of being courier to Cromwell and the King, makes of Michael Throckmorton's life a tragicomedy of endless journeys back and forth between England and Italy. And even though in time he becomes the loyal friend of the disgraced Pole, who can never risk returning to England while Henry lives, this is no compensation for the childhood love who appears to have been lost along the way. 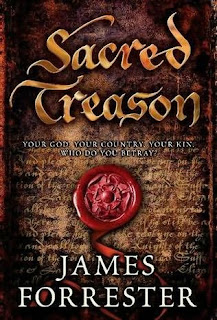 Sacred Treason by James Forrester
London, 1563. England is a troubled nation. Catholic plots against the young Queen Elizabeth spring up all over the country. The herald William Harley - known to everyone as Clarenceux - receives a book from his friend and fellow Catholic, Henry Machyn. But Machyn is in fear of his life... What secret can the book hold? And then Clarenceux is visited by the State in the form of Francis Walsingham and his ruthless enforcers, who will stop at nothing to gain possession of it. If Clarenceux and his family are to survive the terror of the state, he must solve the clues contained in the book to unlock its dangerous secrets before it's too late. And when he does, he realises that it's not only his life and the lives of those most dear to him that are at stake...
Posted by Karen (Euro Crime) at 7:53 am

These books are not my cup of tea, but I think the cover for "The Courier's Tale," is beautiful, especially with those medieval-looking fonts, with big and clear lettering.

Even the other cover is okay, except it's a bit too dark.

Both have a flower in the middle which is interesting.