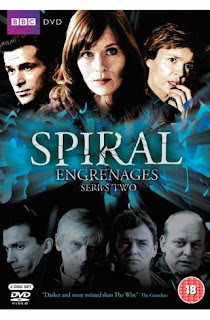 The second series of the brilliant French crime series Spiral (Engrenages) came out on 9 August on R2 DVD. Also available is a box set of the first two series which may or may not be cheaper than buying the series individually, depending on where you buy your DVds from. Series 2 is £12.99 on amazon and play.com

This recent article on Spiral in the Sabotage Times, which includes a brief interview with Audrey Fleurot "Ms Karlsson", gives the glimmer of hope that Series 3 will be shown on BBC4 later in the year.
Posted by Karen (Euro Crime) at 8:36 pm

Hooray! I keep reading that series 3 will be available in the UK later this year, I sure hope so. Thanks for the news about the DVD of series 2, also.

Any idea if Spiral in dvd is coming over to the states?