The second of Jim Kelly's new series was reviewed on Euro Crime at the weekend, but I'd like to look at the covers from the first book in the series, Death Wore White.

So what are you thoughts on the US and UK covers? Which would entice you to pick the book up if you were not familiar with Jim Kelly?

Here is the Euro Crime review, by Pat, of Death Wore White. 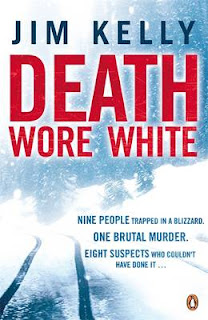 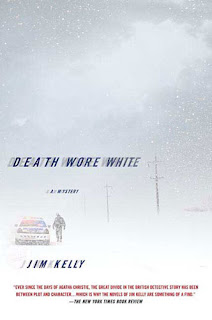 (This series is set in North Norfolk, a rural part of England, so I'm a bit puzzled by what looks to be an American squad car! ps If you click on the US cover you can read the writing.)
Posted by Karen (Euro Crime) at 8:57 am

Personally, I like the design of the US version better, though as you say, it should not depict a US scene! Though maybe they think nobody would read it otherwise. I like the design because it is more original and distinctive than most.

Karen - I usually don't like printing as large as on the U.K. cover, but I like that one better this time. Maybe my eyes are getting too old ; ).

I do like the US cover and design better and it would be ideal if the novel were set in North Dakota rather than North Norfolk. I am reminded of the Liza Marklund cover which had a photo of New York in the winter as no one could come up with a photo of snow in Stockholm!

The panda car appeals to me, but I don´t like having to use a magnifying glass to decode a tiny picture in the corner of the cover.

The UK one is not perfect either; the blue colour is far too bright.

I can't see nor read the US cover so I prefer the UK cover just by virtue of readability.

I guess the publishers aren't trying to appeal to middle-aged and older readers who need to be able to read cover type and see design.

And I did like this book. Read it in hardcover, got it from the library. Another library user recommended the book as she returned it.

So I took it out, read it and enjoyed it. Have no idea what the cover was like. The content was excellent.

And I'll read the next book in this series after having read the review on Eurocrime.