This week's selection for "cover opinions" is the two very different hardback editions of Benjamin Black's Elegy for April, the third in his Quirke series, which is set in 1950s Dublin.

So what are you thoughts on the US and UK covers? Which would entice you to pick the book up if you were not familiar with Benjamin Black?

Here is the Euro Crime review, by Laura, of Elegy for April. 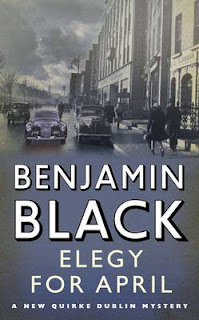 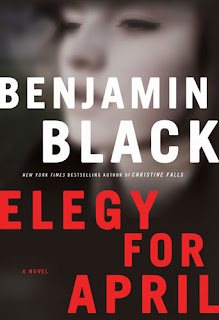 I'm not familiar with Benjamin Black and the right hand cover (UK)is more appealing in my opinion.

Karen - Thanks for sharing this. My vote is for the U.K. cover. The street scene draws me in...

No doubt at all - the UK one is beautiful, the US one absolutely unappealing.

Another vote for the UK cover.
I think it is interesting that the author's name is in a so much bigger font than the title on the UK cover.
I have to admit that I found the only Banville-Black-Quirke book I read a bit slow, atmospheric but slow.

I happen to really like it. Both of them.

I like them both. The UK cover strikes me as a more professionally designed cover, the US more amateur. But the UK cover says to me "historical" which, if I were not keen on historical novels, would put me off. It also says, possibly, "old fashioned". Whereas the US cover says neither, rather it says "enigmatic". So although I think the UK cover is better as a design, I think the US cover is more intriguing to me as a potential reader.

I have not read any of his crime books yet but have had one on my shelf for ages and ages.

I actually like the US version better, at least in terms of leading me to buy the book, because the UK cover reads "historical" to me, and a bit quaint and sepia-toned. I think the coziness of that cover ill-suited to the Black books.

I like both. The UK cover looks a bit more historical like from a shot of some BBC detective stories from the 40s and 50s.

But it is interesting. The US cover is okay. (At least I can read everything, not a small thing these days.)

They are, however, historical....

I definitely prefer the UK one. Much more artful. As they generally are!