The Girl with the Dragon Tattoo DVD

The Girl with the Dragon Tattoo has just been released on R2 DVD. At the moment amazon.co.uk and play.com have it at £10.99. 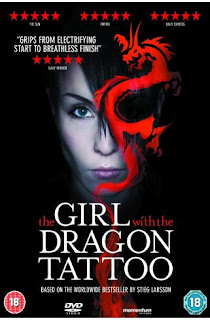 Official synopsis:
From the literary phenomenon by Stieg Larsson comes this gripping new thriller which will have you guessing right until the very end.

Forty years ago, Harriet Vanger disappeared off the secluded island owned and inhabited by the powerful Vanger family. There was no corpse, no witnesses, no evidence. Nearly forty years later a journalist by the name of Mikael Blomqvist gets an unusual assignment. He's contacted by Harriet's uncle, Henrik Vanger, who wants him to find out what really happened to Harriet. Mikael takes on the job, with help from mysterious biker girl and computer hacker Lisbeth Salander. This unlikely pair form a fragile bond as they dig into the sinister past of this family and find out just how far they're prepared to go to protect themselves - and each other.

Labels: DVD, The Girl with the Dragon Tattoo