Stella Rimington's Deadline is the fourth in her Liz Carlyle series set in Britain's MI5/MI6 milieu.

There are three covers to consider today: the US one on the left which came out in June 2010 (hardback) (the white text says "a novel from the former head of Britain's MI5"), the UK hardback on the right (2008) or the UK paperback (2009, below).

So what are you thoughts on the US and UK covers? Which would entice you to pick the book up if you were not familiar with Stella Rimington? (I think she's probably better known in the UK than US.)

Here is the Euro Crime review, by Norman, of Dead Line. 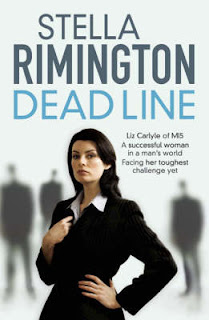 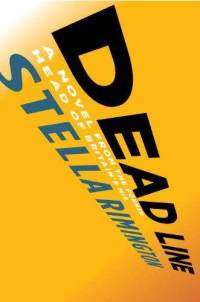 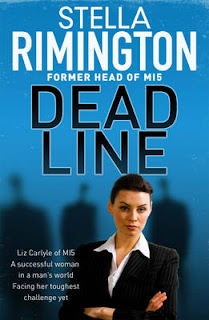 Honestly? None of them!
The American one I couldn't even read properly, the UK ones are slightly better but am not a fan of 'photo' covers like those. I prefer to try and picture the characters myself whilst reading the books rather than having someone decide for me :)

Karen - I always like your cover option posts : ). Hmm...I honestly am not really keen on any of the covers. Forced to choose, though, I'd go for the UK paperback.

I prefer the UK hardback. I would never look twice at a cover like the yellow one. Looks like non-fiction.

None of the covers would induce me to pick up the book. I think the photo covers look non-fiction (interesting that Dorte thinks the same of the yellow one).

I hate them all pretty much equally -- with the added note that the yellow cover just gives me a headache...

Don't like the U.S. cover, can barely figure it out. The UK covers are passable, although I, too, don't like photos on covers unless they're biography, autobiography or memoir--i.e., of real people, not a model's photo of a fictional character.