Inspector Morse takes to the Stage

I've just received my Malvern Theatre Autumn brochure and what do I find? That there is an Inspector Morse play - House of Ghosts with Morse played by the former Doctor Colin Baker. 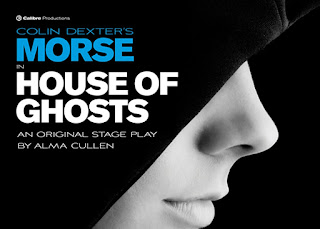 Exactly 35 years after a certain grumpy super-sleuth with an eye for the ladies and a thirst for beer made his first appearance in Colin Dexter's novel Last Bus to Woodstock, he's back…

Inspector Morse takes to the stage in Autumn 2010 in an all-new murder mystery, House of Ghosts. By special arrangement with Colin Dexter and starring Colin Baker (Dr Who) as Morse, Alma Cullen – the writer behind four of the hugely successful ITV episodes and Director Robin Herford (Woman in Black) – bring the inscrutable detective to audiences across the UK in what promises to be one of the theatrical events of the year.

Since Oxford undergraduate days, Morse has regarded theatre director Laurence Baxter as the only truly evil man he has ever met. So what happens when, twenty-odd years later, Morse finds Baxter at the centre of a murder case that involves the on-stage death of a young actress?

A list of tour dates can be found on this Colin Baker website (scroll down to 7.05). The production runs from late August to early December and the venues include (but are not limited to) Richmond, Oxford, Cardiff, Coventry, Malvern, Wolverhampton.
Posted by Karen (Euro Crime) at 3:21 pm