The Play's the Thing - Sherlock Holmes

The Secret of Sherlock Holmes is to run from 20th July, for eight weeks, at The Duchess theatre in London's 'glittering West End':

Peter Egan and Robert Daws will recreate the partnership of Sherlock Holmes and Doctor Watson on stage when The Secret Of Sherlock Holmes comes to the Duchess theatre from 20 July (previews from 15 July). 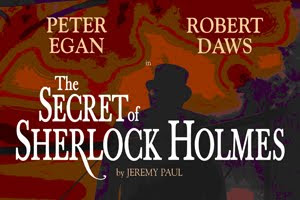 Premiered in 1988, Jeremy Paul’s play centres on a seemingly deadly encounter between Arthur Conan Doyle’s famous detective Holmes and his nemesis, arch criminal Professor Moriarty, at Reichenbach Falls. As secrets and betrayal are slowly revealed, Watson finds his loyalty and friendship tested to the very limit, Holmes is forced to turn his unswerving powers of deduction upon himself and the true relationship between Holmes and Moriarty is finally revealed.

Tickets can be booked via this website though there may be other ways(!).
Posted by Karen (Euro Crime) at 8:43 am