I'm afraid this one had passed me by until copies started appearing on the reservation shelf at work. Margaret Rutherford: Dreadnought with Good Manners by Andy Merriman was published in September by Aurum Press: 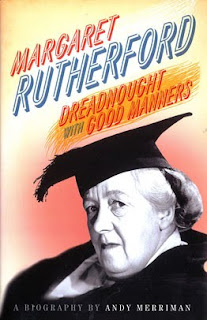 She was one of our most idiosyncratic actresses, appearing in such thoroughly English classics as Blithe Spirit, The Importance of Being Earnest, Passport to Pimilico, I’m Alright Jack and four Miss Marple films. For this new biography - the first in over 25 years - Andy Merriman has interviewed scores of people who knew Margaret Rutherford. The result is an immensely compassionate and sometimes shocking portrait of an eccentric, vulnerable, naïve, lovable woman, generous to fault, who delighted audiences with some of the finest comic performances of any British actress.
Posted by Karen (Euro Crime) at 2:05 pm

If it is done well, this would be worth reading. I read a biography of her by Dawn Langley Simmons -- the adopted child of Rutherford and Stringer Davis (her homosexual but companionable husband) -- who was actually born Gordon Langley Hall, an early case of sexual reassignment surgery. And I recall from that book how Margaret Rutherford Benn, cousin of Tony, lost the family name as a result of her father murdering his own father. And her mother committed suicide, as did her mother's sister. Anyway, I'm not sure what Aurum's "shocking portrait" means here -- Rutherford was not shocking, but the events and battles of her life often were, a different matter altogether, and such as to make any good biography of her worth reading.

Stringer Davis and Gordon Langley are two separate people. If you had actually read the book you would know that.

The book is a history of her work and a disappointment for people wanting to find out more about this great actress.