The French Film Festival is currently running in some venues in the UK. (See here for which cinemas are taking part.) It finishes on 20 December.

One of the films on offer is 2008's Le Crime Est Notre Affaire (Crime is Our Business) in which Agatha Christie's married sleuths, the Beresfords, return: 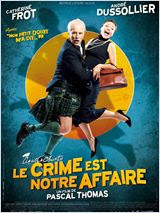 The latest adventures of Belisaire and Prudence Beresford, adapted stylishly from Agatha Christie, find the pair enjoying peaceful days in their château but Prudence is bored and longs for a crime.

Bringing back most of the cast and crew from his two previous Christie yarns, By the Pricking of My Thumbs and Towards Zero, writer-director Pascal Thomas adds another instalment to a consistently entertaining series.

Based primarily on the short story The House of Lurking Death, which appeared in the author's 1929 collection Partners in Crime, but also including shades of 4:50 From Paddington, Thomas brings back that uncanny duo Prudence (Frot) and Belisaire Beresford (Dussollier), last seen Sherlocking together in Thumbs.

With Belisaire now retired from the secret service and the couple living tranquilly in the stunningly photographed Rhône-Alpes region, bored Prudence is just dying for a new crime to solve. Her wish is soon granted when visiting Auntie Babette (Annie Cordy in an engaging cameo) arrives on a train, on which she claims to have witnessed a murder.

The trailer below shows the first few minutes of the film: