No, this has nothing to do with deaths of The Sun's glamour models but rather is the title of a book from a new-to-me author. Whilst searching the library catalogue for Elly Griffiths, I only put in Griffiths, Ell and the search also turned up Ella Griffiths and the titles Murder on Page Three and The Water Widow. Thinking they look like crime titles I had a closer look and lo and behold, much excitement ensues as it turns out they have been translated from the Norwegian...

I've only been able to get hold of Murder on Page Three so far, The Water Widow being out on loan (only 1 copy of each in the system). Her series characters are Oslo-based Detective Sergeant Rudolf Nilsen and his brother Detective Constable Karsten Nilsen. 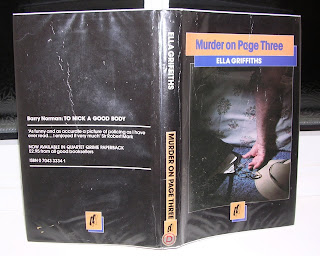 Here are the front and back flaps (which are clear if you click on them) revealing a bit about the plot and the author.

Murder on Page Three was published in Norwegian in 1982 and in English in 1984 by Quartet Qrime. The translator is J Basil Cowlishaw.

The Water Widow was published in English in 1986 and I've also found reference to a short story collection called The Dead Don’t Steal and the title story was made into a Tales of the Unexpected episode in 1988.

Here're the first few paragraphs from Murder on Page Three:

Lucky was getting restless. He wanted to go out. Karin pretended not to notice; she was trying to think. The sheet of paper in her typewriter was as pristinely white as when she had inserted it over an hour ago.

"Make sure there's a murder in the first chapter," her publisher had said. "The best would be on page three."

She had objected that she wasn't a tailor, running up suits made to measure, at which he had laughingly countered with: "Maybe not, but you are Norway's Agatha Christie, and you have a reputation to keep up".

Here's the blurb from The Water Widow:

The case begins when a fifty-five-year-old shop assistant with a raging toothache visits the dentist. He's shown into the surgery by a tall woman dressed in widow's weeds, and is never seen alive again."

Oh, Murder on Page Threelooks really intriguing! Thanks for sharing Ella Griffith with us.

Funny to meet a new-to-me Norwegian author here. I must look for her in the library.

I'm definitely going to see if I can get hold of these, they look just like my cup of tea. Well discovered;-)

Karen, from memory I think this author contributed short stories to one or more CWA anthologies.

Hi Karen, I looked on Amazon and found these two on sale cheaply second hand, and a third - so have ordered all three, rashly! Thanks for the tip. I hope they are good, they certainly sound it. I didn't want to risk buying one, reading and enjoying it, and finding that the other two titles have sold out. (As they aren't in print, it seems.)