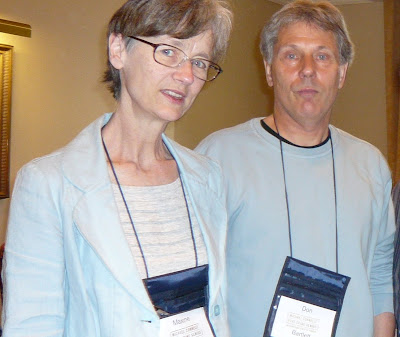 At CrimeFest in May, the Euro Crime representatives (Maxine pictured left, Norman and myself*) got to spend a few minutes with the very affable Don Bartlett, perhaps best known to crime fiction readers as the translator of Jo Nesbo's and K O Dahl's books, from the Norwegian to English.

(*He had already picked us out from the audience at the translation panel as the "crime bloggers" so not sure what that says about us :)).

Don has very kindly agreed to answer some questions about himself and his work:

EC: Britain's not known for its language skills - generally speaking people know a smattering of French, German or Spanish at best, so what led you to languages?

DB: I have always been interested in language and reading. At school we had French and German language assistants. They were fun, despite having to be with us, so that motivated me. What has happened to language assistants by the way? I stayed with a German family for a week, hitch-hiked around northern Europe in the holidays and had a German girlfriend.

EC: Your CV is very impressive: offering translations from German, Danish, Norwegian, Swedish and Spanish. Your recent work has mainly been from the Norwegian, do you prefer Norwegian or is that where the work is?

DB: I was recommended by David McDuff to read Norwegian crime fiction and it started from there. Norwegian literature punches above its weight, I like it and for me that is where the work is.

EC: Did you always have plans to be a translator, or is this an unexpected career path?

DB: Unexpected. The organisation where I was working centralised and those of us on the edge knew what was coming. I had felt I needed to get back to foreign languages and so I started doing something about it, translation courses, etc.

EC: With the Gunnar Staalesen series, the earlier books have had different translators. Do you read the other translations and try and match the tone/style or just focus on the original words?

DB: I have read one earlier translation, and of course I have read the other books by Staalesen. I decided it made more sense to take THE CONSORTS OF DEATH on its own terms.

EC: You're the current translator for three series written by male authors (Dahl, Nesbo, Staalesen). Would you like to translate a female author's books in the future or is the gender of the author irrelevant to your work?

DB: I started with Pernille Rygg. Shame she didn’t develop a series! I think the books come first. Not sure that translators have much choice over the direction of their work anyway.