Solve The ABC Murders on the DS

Already out in the US, Agatha Christie's The ABC Murders DS game will be out in the UK on the 20th. 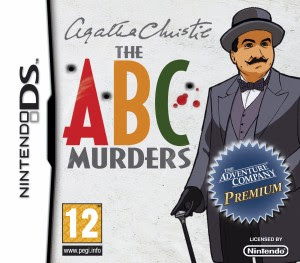 Agatha Christie’s A.B.C Murders tells the story of Captain Hastings and Hercule Poirot as they attempt to solve a series of bizarre murders committed by an elusive madman.

Going off the simple clue of the A.B.C railway guide left at the scene of each crime, Hastings and Poirot follow the leads to Andover, Bexhill, Churston, and Doncaster trying to apprehend the killer before the next crime is committed.

He soon realizes a serial killer is on the loose, murdering his victims in alphabetical order, leaving an ABC Railway Guide beside each body and playing a dangerous game with Hercule Poirot. He alerts Poirot in advance of the locations of the murders, but Poirot always arrives too late. Intrigued by the psychopath’s mind and methodology, Poirot travels the length and breadth of England - determined to track down this ruthless killer.

* Live through a modern classic for the first time on the Nintendo DS.

* Solve the crime in multiple ways, and then solve it again!

* Use your Investigator’s Journal to record clues and notes.

* Collect hidden notes found in-game that contains unique facts about Agatha Christie or one of her characters.

Having been disappointed with some recent mystery DS games, I'd appreciate some feedback on this one.
Posted by Karen (Euro Crime) at 8:03 pm

It would be great if you'd submit this to the Agatha Christie Blog Carnival Karen. The next is on November 23.

Thanks for posting this. I'm sort of collecting mystery games for the DS and I think I'll like this one!