Today's instalment of favourite discoveries of 2013 comes from reviewer Susan White who chooses a new tv crime series which is now available on DVD (if you missed it in its day-time slot). 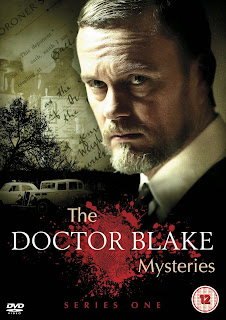 My discovery of 2013 is The Doctor Blake Mysteries - an Australian series premiered in 2013 and shown on BBC1 in the afternoons - a real gem.

Doctor Blake, a keeper of secrets, a solver of mysteries.

The Doctor Blake Mysteries is an original, period murder mystery series, starring Craig McLachlan as the maverick town doctor Lucien Blake - a risk-taker, he's impulsive and not afraid to upset the status quo.

Doctor Lucien Blake left Ballarat as a young man. But now, he finds himself returning, to take over his dead father's medical practice. And one of the unwanted duties his father left him is the on-call role of police surgeon.

Set in the old gothic gold rush town of Ballarat in 1959. The wealth that built its grand architecture long gone - but not the mysteries, murder and deceit that linger beneath the surface of its faded glory.
Posted by Karen (Euro Crime) at 9:00 am