Today's instalment of favourite discoveries of 2013 comes from Amanda Gillies who also blogs and reviews at Old Dogs and New Tricks as well as at Euro Crime. 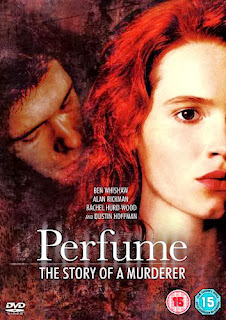 PERFUME, the story of a murderer.

One of my students recommended this nasty tale to me this year and I was very taken with it. I saw the film but also have the book, written by the German author Patrick Suskind and translated by John E. Woods, on my ‘to be read’ pile. The film was made in 2006, so it is very far from new, but it was new to me. Directed by Tom Tykwer, and starring Ben Whishaw, Alan Rickman and Dustin Hoffman, it is the story of a serial killer who has a superhuman sense of smell and is seeking to mix the perfect aroma and make it into the most exquisite perfume ever.

The killer, Jean-Baptiste Grenouille, is born beneath a fish stall in a market and left for dead. His mother, who has had four other children and left them in similar ways, is found guilty of multiple infanticide and is hanged, so he ends up in an orphanage and then scratches out a living working as an apprentice for a tanner. His sense of smell is highly developed and he is able to use it to navigate his way in the dark. One day he comes across a most magnificent aroma – that of a young virgin – and in attempting to smell her properly he accidentally smothers her. This is the beginning of his search for the perfect scent. He soon becomes an apprentice to a famous perfumer but this is not enough for him as he wants to learn how to extract the scents from new and different objects. To fulfill his desire he travels to the city of Grasse, where he meets with extremely talented perfumers and starts to create the most perfect scent ever.

This movie looks at the many emotions that can be associated with smells and also the morality of the human spirit. It is quite disturbing – especially in terms of how you feel about Grenouille; who murders women for their scent yet you end up liking him! I am very keen to read the book as I am told it is even better than the film. If, like me, you enjoy movies that are a bit twisted and make you think, then you will love this one as much as I did!
Posted by Karen (Euro Crime) at 9:00 am