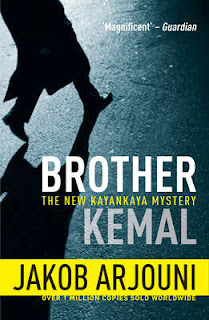 “...My name is Kayankaya, and I look the way I look. I don't know how Muslim I am under religious law, but ask any of my neighbours, I'm sure they could tell you.”

Marieke is sixteen; a talented, committed and attractive young woman according to her mother. Her mother is also attractive, a blonde with a slim, toned body who knows the effect she has on a man. And the man in question this time is local private eye Kemal Kayankaya. But although the look in Valerie de Chavannes' eye says “I only ever think of one thing”, her manner is something else. Kayankaya must find her missing daughter Marieke. She refuses to give him the names of her daughter's friends but what she will tell him that the girl recently came into contact with an older man, a photographer called Erden Abakay, and a less than desirable acquaintance. Valerie de Chavannes is convinced that Marieke is with him. Kayankaya must get her back but he mustn't let her know who hired him to find her. Oh – and he must “discourage” Abakay from further contact. At this point Kayankaya cannot help wondering which of the two – mother or daughter – got to know the photographer first. After more sparring, he agrees to take the case and sets off back to his office.

At the run-down apartment building which houses his place of business, Kayankaya is intercepted by a tall, smart woman who introduces herself as Chief Press Officer for the publisher Maier Verlag. One of their authors is due to attend the forthcoming Frankfurt Book Fair to publicise his latest book. He is Moroccan and his novel is about a policeman who begins to question his Muslim faith when he falls in love with a young man. The central love affair and the book's depiction of Moroccan society has led to a hostile reception from certain Islamist quarters. With death threats made against the author, the publishers wish to hire Kayankaya as a bodyguard. In fact the author chose him for the job. Herr Kayankaya is a Muslim, is he not?....

Kayankaya has two cases to handle in BROTHER KEMAL: one is to find a missing sixteen year old girl and bring her home; the second is to protect a controversial author during his appearance at the Frankfurt Book Fair. Both will throw unexpected complications, not least when he finds a freshly dead body in the flat where the missing girl is being held. The shrewd but impulsive Kayankaya deals with the complication quickly, an act which in itself will have repercussions. And being the outsider that he is – he must also handle the assumptions of his clients as to both his Turkishness and his religious beliefs.

BROTHER KEMAL is the fifth in Arjouni's prize-winning series featuring Frankfurt-based, Turkish-German private eye Kemal Kayankaya. Translated seamlessly by Anthea Bell, who in her long career has worked on books ranging from Asterix to Stefan Zweig by way of Kafka, the result is a one hundred and ninety-two page long, tightly constructed gem. Although a different kind of wit in a different society, Kayankaya is a private-eye in the Raymond Chandler tradition. His confrontations with attractive femme-fatale Valerie de Chavannes recall Philip Marlowe's encounters with equally mysterious but tempting clients. So I waited for the inevitable slap in the face and Kayankaya's answering, rueful smile but they didn't happen; this is Jakob Arjouni's writing not Chandler's. Nevertheless the world-weary wit in his two-edged encounters with clients, acquaintances, and police contacts echo Chandler as does the book's pace and vivid characterisations.

But sadly I have found Jakob Arjouni's imperfect hero too late. The writer died of pancreatic cancer in January 2013 and BROTHER KEMAL is his last book. Publishers No Exit Press are releasing the previous four titles simultaneously by way of tribute and they look to be a classic suite of “outsider noir” tales. I hope to catch up with all of them and meanwhile certainly recommend BROTHER KEMAL to all lovers of mean streets and wily detectives.