OT: Adventures with the Wife in Space by Neil Perryman 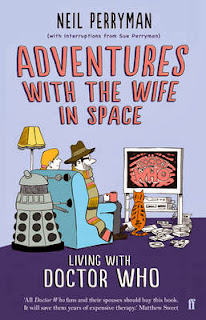 Official blurb:
Neil loves Sue. He also loves Doctor Who. But can he bring his two great loves together? And does he have the right?
In January 2011, Neil Perryman set out on an insane quest to make his wife Sue watch every episode of the classic series of Doctor Who from the very beginning. Even the ones that didn't exist any more. And so, over the next two and half years, Sue gamely watched them all: William Hartnell (the Miserable Git); Patrick Troughton (the Scruffy Drunk); Jon Pertwee (the Pompous Tory); Tom Baker (the Mad One); Peter Davison (the Fit One); Colin Baker (the Court Jester); Sylvester McCoy (the Crafty Sod) and Paul McGann (the One-Night Stand). The result was a wildly successful and hilariously revealing blog called Adventures with the Wife in Space.
But the adventure continues. From awkward years at school, terrified of giant insects, Daleks and rugby players, to even more awkward years as an adult, terrified of unexpected parenthood and being called a Whovian, here Neil tells the all too true story of life as a Doctor Who fan. Funny, honest and surprisingly brave, he also captures perfectly the joys - and fears - of sharing the thing you love with the people you love.
Adventures With the Wife in Space is, at its heart, the story of Doctor Who, and its fans, seen through the eyes of two people - one who knows almost nothing about the programme and another who knows way too much.


Being a Doctor Who fan [Tom Baker is my Doctor] I was very pleased to receive a copy of Adventures with the Wife in Space via Netgalley. I admit I hadn't come across the associated blog but having enjoyed Wiffle Lever to Full! by Bob Fischer and I Love You Dalek by Nick Griffiths I settled down to read.

A few hours later, I can say that I enjoyed it very much and that my only (and minor) complaint is that I would have liked it to be longer and to cover the New Who years. Having, myself, only just slogged through The Unearthly Child (the first serial) with all its non-pc attitudes and lots of unnecessary screaming I'm impressed that non-fan Sue continued on, and though it says she likes New Who I'd have liked a bit more on her opinions of it.

Having finished with Doctor Who, the two will be turning their eyes towards Blake's 7 in 2014.
Posted by Karen (Euro Crime) at 9:18 am

Labels: Adventures With the Wife in Space, Doctor Who, Neil Perryman, Reviews

I haven't watched the Doctor Who series. My hubby might enjoy them, though. Something to think about...