Review: Screams in the Dark by Anna Smith 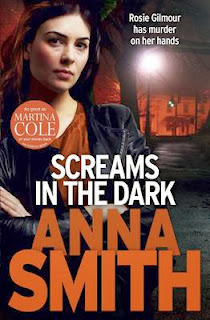 This extraordinarily good third novel by this very gifted author is about the adventures of ace crime reporter Rosie Gilmour who writes for the leading Glasgow tabloid The Post and it is set in July 1999. In a prologue to the main story a refugee cleaner arrives at the office of the solicitor she works for to discover his body hanging from the ceiling in an apparent suicide. His partner, when he arrives removes some files from the desk of the deceased. In another part of the city a naked torso is discovered floating in the River Clyde.

Rosie Gilmour arrives on assignment at a demonstration outside a block of council flats in North Glasgow. The participants are demonstrating against asylum seekers whom they believe are being given special treatment which they object to even though many of them had grandparents who were originally migrants themselves from Ireland. A Kosovan refugee that she befriends named Emir tells her that he arrived in the city a month ago with a childhood friend and one day they were both kidnapped but only he managed to escape. Rosie looks into the story much more deeply and discovers that a lot of refugees from all over Europe have been coming to Glasgow but many have disappeared. Where are they all going? Rosie sees there is a very big story here that she must investigate.

The story takes her all over Glasgow and ultimately to Belgrade before the exciting conclusion. Rosie has a lot of trouble with her investigation and upsets some important people and is seriously roughed up to put her off, but such treatment makes her more determined to get to the bottom of the story. This is a novel which once started is impossible to put down. The story is constantly changing direction as more and more information is acquired. I was very impressed and have taken steps to download her two previous stories to my ereader.

The author has been a journalist for over twenty years and is a former chief reporter for The Daily Record. She has covered wars across the world as well as major investigations and news stories and you can see the authenticity of her research reflected in the storyline of her novels. I was very impressed by the immensely gripping and fast moving story and the pages just shot by. This was a cracking good thriller which covered events which are very topical. I strongly recommend this book.