Today's instalment of favourite discoveries of 2013 comes from me. I've bumped my entry up the list as the book I'm covering is in the Kindle sale until the end of the month. 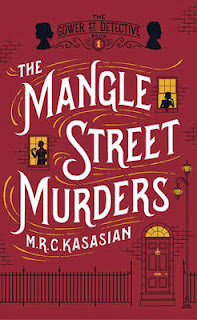 My favourite discovery of the year is THE MANGLE STREET MURDERS by M R C Kasasian. I first heard mention of it on The Readers podcast and put it in my wishlist based on the title alone. I reserved it from the library and read it just before its current 99p promotion on UK Kindle. It's the first in a series and is the author's debut and has Sherlock Holmes echoes about it. It takes the form of a chronicle by March Middleton of a case that happened sixty years earlier in the 1880s.

Young March Middleton has had to leave her family home and come to London to be personal (not private!) detective Sidney Grice's ward. March is a feisty young woman, a smoker and drinker and who has seen a lot by dint of travelling with her army surgeon father. She hides these “vices” from her new guardian but not her ready wit and intelligence. Grice is a vegetarian, non-smoker, non-drinker and works for money rather than a sense of helping his fellow citizens. So when he is approached by a woman whose daughter has been murdered and whose son-in-law has been arrested for the crime, falsely she claims, he turns her down because she has no money. However March steps in with the last of her inheritance to pay Grice to take on the case on the proviso that she, March, can accompany him.

And so the unlikely pairing investigate the case by interviewing the son-in-law, visiting the crime scene and untangling what turns about to be a rather complicated case.

As well as the detective element we also get short diary entries about March's love affair with a soldier.

I really loved reading this book. It is very amusing, with Grice's logical statements and March's witty ripostes to any slurs against womanhood:

“Not much of a place for soppy girls,” one of them said.
“Just as well there are no soppy girls here then, “ I said.

The mystery is intriguing and twisty, you really feel like you're in Victorian London and there is much more to know about Grice and March in future books. I just wish the second book was already available!
Posted by Karen (Euro Crime) at 9:00 am

Sounds excellent - I will definitely try this one.