Review: Blessed Are Those Who Thirst by Anne Holt tr. Anne Bruce 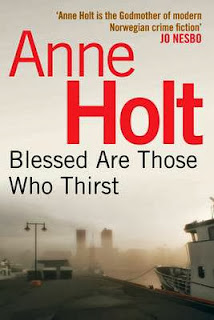 Hanne Wilhelmsen borrowed a flashlight. In the middle of the bloody site, someone had placed a little strip of cardboard, like a gangway, without any rhyme or reason. She stepped carefully across as far as it reached, confirming that here too there was an eight-digit number scratched on the blood-smeared wall...

Early morning, May, Oslo.
Detective Inspector Hanne Wilhelmsen stands in the middle of the shed once used to store wood, it is now empty – except for the blood. Hanne plays her flashlight over the smears and marks on the wall. She can just make out a daubed eight-digit number. Despite its slaughterhouse appearance, the shed is not yet a crime scene. For that they need a victim. Oslo is in the middle of an unseasonal heat wave and its police force is in the middle of an equally overwhelming crime wave: three murders and sixteen rapes in six weeks. With the press having a field day and the public complaining about “police incompetence”, a week after the bloody scene in the shed Hanne is taking stock of an almost identical one. This time it is a parking garage. Another eight-digit number smeared on the wall. A third killing scene is found and these events are dubbed the “Saturday Night Massacres”. But one Saturday night sees a young women brutally raped in her own apartment. She is traumatised and unable to describe her attacker; she cannot bring his face to mind. And her father is shocked. For how can he help his daughter? How can he protect her? Although the police team interview the girl's neighbours no one tells them anything useful. Hanne politely accepts tea and stale cake from one old man but he too is uninformative. When Hanne leaves, the old man resumes his window seat and carries on thinking about the tall, well-built man he saw getting into the car that night. Taking off like a bat out of hell...

Anne Holt began her legal career in the Oslo police department – so she is no stranger to the workings of the Norwegian legal system. BLESSED ARE THOSE WHO THIRST is the second in her successful crime series featuring police detective Hanne Wilhelmsen. First published in 1994, almost twenty years ago, its themes remain undated; an under-resourced police force battling rising crime and social pressures which this time include resentment against immigrants and asylum seekers. Hanne's team is presented with a series of gruesome, bloodied killing-sites in which not all the blood is human. The challenge of these crime scenes without victims is eventually broken by the discovery of a woman's body. But they also have to track down a brutal rapist and whilst the police struggle to find a clue in the rape case, others take up the hunt for the rapist. In Holt's first Hanne Wilhelmsen novel BLIND GODDESS and in this second book there are aspects of the state system that stand open to flaws and corruption; power, powerlessness, revenge, and victim-hood are all threads that gather into the plot's exciting conclusion. Holt also continues to explore the lives of Hanne and her fellow police team members. Hanne is struggling to keep her private life (her fifteen-year-long lesbian relationship with live-in partner Cecilie) a secret, to the chagrin of Cecilie herself. And she starts to build a closer relationship with her fellow team members: undercover policemen Billy T and police attorney Hakon Sand who, involved with a married woman, is ironically someone else with a secret life.

I found a coolness in the writing that was initially off-putting. But the three Holt books that I have read so far have each had a different translator (perhaps because of the long time it has taken for her books to appear in English translation) so I have found it hard to identify Holt's voice as such. How much is the writer's voice affected by different translators? This edition of BLESSED ARE THOSE WHO THIRST is translated by Anne Bruce who has also translated the third in the series, DEATH OF THE DEMON. Whatever the answer to my question, I think this is a book of substance and that Holt is an important part of the Scandinavian crime fiction scene. I shall also long relish the striking image of a sleepless Hanne, riding around the night-time streets of Oslo on her rose-pink Harley-Davidson.

I find your final point interesting because I had real trouble getting into this novel and in the end didn't finish it, which has never happened with a Holt novel before. It hadn't struck me to check on the translators but now that you've mentioned it I may go back and try again bearing in mind that it may well not be Holt's fault that I found it so difficult to engage with.

I have just finished reading Death of the Demon by Anne Holt, the first of her books I have read. It was translated by Anne Bruce and I had a lot of trouble with the translation. I don't know Norwegian at all, but find it hard to believe that the author has used the word "outburst" five times, often without the real sense that outburst has in English. Other aspects of the translation didn't ring true for me either. The writing seemed very flat, though I think that is typical of Scandinavian writing and didn't bother me, but I did wonder sometimes if the very simple style wasn't the translator's words rather than the author's.