Review: The City of Strangers by Michael Russell 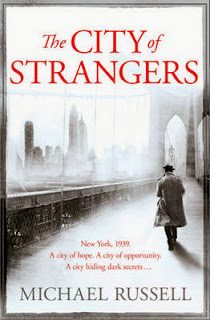 THE CITY OF STRANGERS is set in Ireland and New York in 1939. Stefan Gillespie is a Garda police sergeant. Once a prospective high flyer in Dublin, he has for a variety of reasons moved to a backwater to police the area around Baltinglass. Since his wife died he and his son Tom have lived with Stefan’s parents on their farm below Kilranelagh. The family are from German descent and are worried about the impending war.

Stefan is called to Dublin to undertake a journey to New York to bring back the actor Owen Harris who is suspected of having killed his mother. On the transatlantic flying boat he meets up with an American, Dominic Carroll, who is the leader of Clan na Gael supporting the IRA in their fight for a united country.

Once in the city Stefan is amazed at the size and vibrancy. The World’s Fair exhibition is opening and he meets up with Captain John Cavendish, ostensibly looking at security at the exhibition, but also part of Ireland’s special branch. John is helping Kate O’Donnell who is trying to get her sister Niamh out of an asylum and away from her American husband Dominic Carroll.

When John is killed, Stefan decides to help Kate and together with the aid of the Jewish leader of the local mob - Longie Zwillman, they embark on a dangerous plan. Will it succeed and will Stefan get his prisoner back to Ireland?

THE CITY OF STRANGERS is rich with characters like the black jazz musician and lover of Niamh, Jimmy Palmer; some are real characters like the IRA leader Sean Russell and the radical Roman Catholic preacher, father Charles Coughlin, who preached on his radio show, against America joining the war.

It is also very well researched. I didn’t realise the extent of the dislike of Britain by some Americans (particularly Irish immigrants). The conflicting emotions as the Nazis make their moves on Europe are tensely described. I will certainly purchase the author’s preceding book THE CITY OF SHADOWS. He read English at Oxford and besides working on a farm in Devon, worked in TV as a producer. He and his family now live in Ireland.