From Darcy to Bond and back to Darcy (via Fossum)

I like to put on the blog the cover of what I'm reading or listening to but I haven't been able to find an image of the audio book cover of my current listen: Octopussy by Ian Fleming which is narrated by David Rintoul.

I've long been a fan of David Rintoul's narration skills as he is absolutely fabulous in his interpretation of Karin Fossum's Inspector Sejer series, including He Who Fears the Wolf and When the Devil Holds the Candle.

Whilst I was trying to find a cover I came across a casting coup equivalent to Colin Firth playing Mark Darcy in Bridget Jones's Diary. Mr Darcy's Diary by Maya Slater is also narrated by David Rintoul and David Rintoul played Mr Darcy in the BBC's 1980 production of Pride and Prejudice. 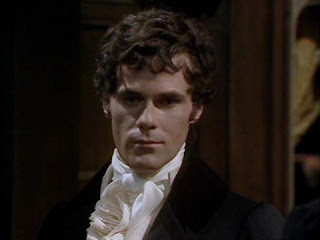 You can watch a fuzzy snippet of Elizabeth Garvie and David Rintoul in that version of Pride and Prejudice on You Tube.

This version of Pride and Prejudice is available as Region 1 (US) but the Region 2 is in German though an amazon poster says that you can play it in English.
Posted by Karen (Euro Crime) at 7:58 am