I'm not the only one eagerly awaiting Death's Sister, the follow-up to 2004's Perception of Death. Due to some family problems there's been a huge delay, the latest release date was February 2008 which has come and gone. However on the Val McDermid forum, a new date of June has been said with some confidence. Fingers crossed! 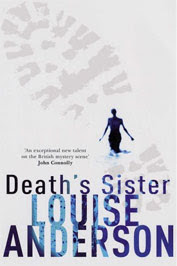 Synopsis: After her brother, Leland, was committed to an institution for the insane, for a series of brutal murders, Erin Paterson thought that she might have, a little more time to devote to her law practice in Glasgow.

But when a murder is committed in the United States, a murder that has all the trademarks of her brother's homicidal mania, Erin's always vulnerable peace of mind is threatened once again.

And when the man she was closest to, Paul Gabriel - investigative journalist and an ex-policeman - also disappears in America, an anguished call from his daughter, sets Erin off on a dark trail to uncover a world, she would have preferred to leave undisturbed.
Posted by Karen (Euro Crime) at 9:36 am

Any news on this release, and if it will be on audio soon?

Well not much news alas. The US edition of Perception of Death came out earlier this year and she was quoted as hoping to have book 2 out this year (see this second post: http://eurocrime.blogspot.com/2009/03/louise-andersons-next-book.html).