I've just started my first Indridason. Indridason is the author of the Detective Erlendur series set in Reykjavik and 'Voices' is the third to be translated into English (but I make it the 5th in the series.) 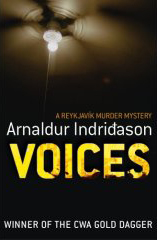 Synopsis from amazon.co.uk:
"Detective Erlendur encounters memories of his troubled past in this gripping and award-winning continuation of the "Reykjavik Murder Mysteries". At a grand Reykjavik hotel, the doorman has been repeatedly stabbed in the dingy basement room he called home. It is only a few days before Christmas and he was preparing to appear as Santa Claus at a children's party. The manager tries to keep the murder under wraps. A glum detective taking up residence in his hotel and an intrusive murder investigation are not what he needs. As Erlendur quietly surveys the cast of grotesques who populate the hotel, the web of malice, greed and corruption that lies beneath its surface reveals itself. Everyone has something to hide. But most shocking is the childhood secret of the dead man who, many years before, was the most famous child singer in the country: it turns out to be a brush with stardom which would ultimately cost him everything. As Christmas Day approaches Erlendur must delve deeply into the past to find the man's killer. "Voices" is a tense, atmospheric and disturbing novel from one of Europe's greatest crime writers."

So far, Erlendur is reminding me of Wallander from Mankell's series though my experiences is limited to having listened to 'The Fifth Woman'.
Posted by Karen (Euro Crime) at 7:56 pm

I'm not reading a word of your post because I haven't read the book yet! Waiting for the pb. But as you probably know I very much enjoyed his other two that are translated -- Jar City and Silence of the Grave (the latter is better I think, mainly becuase the plot of the former has an obvious flaw).
Like Mankell, the pull of these books for me is the character of the main detective, together with his (awful) personal/"family" life. The other detectives are also fairly interesting but I felt that the author hadn't developed this aspect as much as he could have done-- maybe the others come over as slightly cardboard so you can't remember them between books, a bit like Mankell's "Wallender team" who I can never get straight between books.

But this is a mere caveat, I think Indridason is a great author of the genre. You might want to check out Bibliophile's "Another 52 books" blog -- she is an Icelander (correct noun?) in Iceland, and has reviewed/posted about this author-- at least one review is of an original Icelandic language version.

I sneaked a look at Karen's excellent post through sort of half parted fingers. Voices is here and I am so looking forward to it - maybe Christmas in the hammock under the apple tree, although the last few years I have tried to reserve that for the latest Mark Billingham book.

Voices is the darkest book of the series so far, and one of the three best, the others being "Silence of the Grave" and the as yet untranslated "Winter City". "Jar City" and the first book, "Sons of Earth" both have unfortunate flaws. Maxine has written about the "Jar City" problem. "Sons of Earth" has a ludicrous sci-fi element which is probably why it has not been translated yet into English and perhaps never will.

Incidentally, the author is so well known in Iceland that we refer to him just as Arnaldur. There is no need to mention his last name, everyone knows who he is.

Hi Bibliophile. Thanks for popping in :-). I've almost finished 'Voices' and it is dark - and the cover reflects that now I come to think about it!

Do you thing it will be an International Dagger contender next year?

The next one available in English is 'The Draining Lake' (Kleifarvatn). I bought 'Jar City' when it came out but of course, haven't got round to it and I hate going backwards in a series.