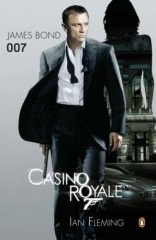 Today's Guardian reviews the new Penguin film-tie-in edition of Casino Royale. It's hard to believe that the book was written in 1953.

The review concludes:
"You should also read this because, without doing so, you will never have a complete picture of the imaginative postwar life of this country. It is odd to think that people watching the coronation of Queen Elizabeth II could take a break by reading the newly published hardback edition of this book. When Larkin said that sexual intercourse began in 1963, you may think that he was exactly a decade out. And in his hugely enjoyable study of Bond, The Man Who Saved Britain, Simon Winder points out that the key moment in the novel is when Bond orders an avocado pear ("with french dressing") for dessert. We forget how exotic and desirable the avocado was in 1953; and how hard it was to take money out of the country. When Bond is gambling with thousands of pounds at the baccarat table, British readers must have been boggle-eyed with envy. And even northern France, while a modestly dipped toe in the waters of Abroad, was still a start.

The other reason to read the books is that they are enormous fun. But you might have guessed that already."

Read the rest of the review here.
Posted by Karen (Euro Crime) at 11:58 am

I think I'll get that for my father for Christmas. It will make a nice and nostalgic change for him! Thanks for the prompt!

The review even makes me inclined to read it even though I'm not much into that type of book. I plan to see the film, though I'm not a regular Bond film goer. I did see the two Timothy Dalton ones and the last Brosnan one at the cinema.