From Arcadia Books: "Leif Davidsen is a Danish journalist and the author of a number of best-selling suspense novels. He has worked for many years for Danish radio and television as a foreign correspondent and editor of foreign news, specialising in Russian, East and Central European affairs." 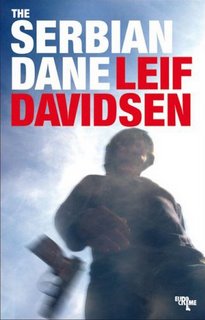 Will Vuk succeed in killing an Iranian author or will the police, who are aware of his intentions, succeed in capturing him? Find out in this dramatic political thriller from one of Denmark's finest crime writers.

Iranian mullahs have offered a four-million dollar reward to the person who carries out their fatwa, the death sentence of the internationally acclaimed author Sara Santanda. A Danish daily newspaper has in cooperation with the Danish PEN centre invited her to Copenhagen, and police officer Per Toftlund of the Danish Secret Service is put in charge of protecting her. A politician in parliament strikes a deal with dire consequences, and somewhere in the former Yugoslavia a young man signs up for murder. The man is Vuk. He is the Serbian Dane.

I've put the cover in quite large as I can't make out if that's a decaying body in a uniform! 'The Serbian Dane' is out 2 December.
Posted by Karen (Euro Crime) at 8:06 pm