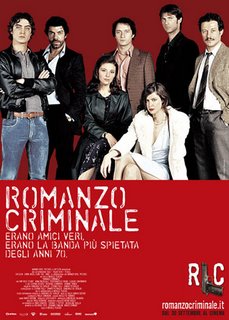 I spotted this in the weekend's papers and the film is released tomorrow.

"Rome, 1960s. Three young criminals, Lebanese (Pierfrancesco Favino), Ice (Kim Rossi Stuart) and Dandy (Claudio Santamaria), decide to take a step up from the streets of Rome into the world of organized crime.

It’s the birth of a smart and ruthless organization which soon crushes all its rivals assuming total control of the drugs trade, whilst imposing brutal criminal laws on Rome. Their progress and changes in leadership take place over twenty-five years, from the 1970s into the '90s, and are inseparably intertwined with the dark history of modern Italy: terrorism, kidnappings and corruption at the highest levels of government.

As the three friends head to the end of an era where all vendettas are executed and scores are settled only one question remains, who will be left standing."

At the official UK website you can search to see which cinemas will be showing it.

I was lucky to see a free preview of Romanzo Criminale last month, and thought it was stunning. But I was influenced by the brilliant performance by Anna Mougalis as Patrizia.

it's an impressive film, but was more impressed by the male actors, particularly Kim Rossi Stuart. Mouglalis does a fair job, but being French she is actually dubbed into Italian and the clash between acting and voice didn't help her performance gel.
Worth pointing out it's an adaptation of what was possibly Italy's bestelling crime novel of the last decade, written by Giancarlo de Cataldo. At 600 pages or so, and once the film is out, it's unlikely to now be translated sadly.
Interestingly enough (even though he collaborated on the script) many of the characters suffer very different fates in book and movie!

"Mouglalis does a fair job, but being French she is actually dubbed into Italian and the clash between acting and voice didn't help her performance gel."

Sorry, my brain does not work fast these days.
I was struggling to read the English subtitles, while staring at Ms Mougalis so I did not notice the dubbing.