Here's another tastefully covered offering from Soho Press and thus another book is added to the wishlist. 'The Collaborator of Bethlehem' by British author, Matt Beynon Rees, is billed as the first in a series of Palestine mysteries and the main character is history teacher, Omar Yussef. 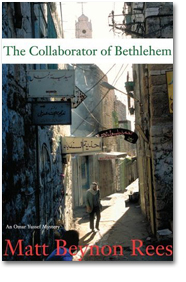 Synopsis:
"For decades, Omar Yussef has been a teacher of history to the children of Bethlehem. When a favorite former pupil, George Saba, a member of the Palestinian Christian minority, is arrested for collaborating with the Israelis in the killing of a Palestinian guerrilla, Omar is sure he has been framed. If George is not cleared, he faces imminent execution.Then the wife of the dead man, also one of Omar Yussef’s former pupils, is murdered, possibly raped. When he begins to suspect the head of the Bethlehem al-Aqsa Martyrs Brigades is the true collaborator, Omar and his family are threatened. But as no one else is willing to stand up to the violent Martyrs Brigades men, who hold the real power in the town, it is up to him to investigate."

About the author:
From his website: "Matt Beynon Rees is a mystery novelist and journalist. As a reporter, he has covered the Middle East for over a decade, with the vast majority of that time spent amongst Palestinians and Israelis. He’s a Contributor for Time based in Jerusalem, where he was the magazine’s bureau chief from June 2000 until January 2006. He was born in Wales in 1967 and studied at Oxford University and the University of Maryland. Beynon Rees wrote award-winning stories about the violence of the Aqsa intifada for Time."

The US edition will be out in February 2007 and according to his blog, the UK version, retitled 'The Bethlehem Murders', will be out in June 2007.
Posted by Karen (Euro Crime) at 2:21 pm

Read it. Loved it! Eli

This book is now officially published in the UK by Atlantic Books. The title is different -- in the UK it's "THE BETHLEHEM MURDERS" -- and actually I think the cover art is a lot better in the UK, too. I hope you enjoy it. Matt Rees