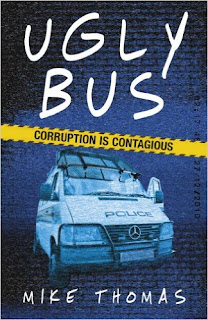 It's Boxing Day and in Cardiff there is to be a big football match between Cardiff and Swansea and the police expect trouble between the rival groups of fans and those with militant tendencies, so vans of officers are sent in anticipation of violence.

This story is about the officers on one particular bus or TSG (territorial support group) vehicle. There are a lot of acronyms and police jargon used in this book such as MOP for member of the public but a handy glossary is available in the back explaining it all. The officers involved include newbie Police Sergeant Martin Finch who gets a lot of aggravation and flack from the more experienced but less senior officers, Andrew Mills, David Murphy, Alan Redding and lastly but not least Vincent Vinyard. It becomes apparent that each officer has at least one major character defect but this only comes out gradually to Martin as the shift progresses. There is a lot of repartee and general good natured humour between the men.

The shift on the van have a maxim "What happens on the van stays on the van" and there is a lot of petty skulduggery and theft done by the van occupants and there is a detailed character background about all the hangups and problems of the people on board.
The book covers the complete shift from about 2pm when they start and are initially given a pep talk by a senior officer, to them preparing their food to carry with them for their meal break and general preparation of their kit and stowage on the vehicle. Then we get the progress of their shift as it carries on until about 3am.

There is a preface to the story in which terribly distraught and inebriated girl staggers into a police station to report a rape and this is further dealt with in the final chapter.

I haven't read the author's previous book and consequently the rhythm of this book and the general drift took me by surprise with the completely unexpected ending to this story.

The author was a serving police officer for over twenty years and took inspiration for his two books from those years, but he now lives in Portugal. His first novel POCKET NOTEBOOK was longlisted for the Wales Book Of The Year Award.

I was greatly surprised with this book, the coarse language between the various officers is perhaps typical of groups of men on their own but the amount of criminality carried out by these people really surprised me but I was absolutely really blown away by the completely unexpected ending to the story. A very arresting story. Recommended.