Review: Chef Maurice and a Spot of Truffle by J A Lang 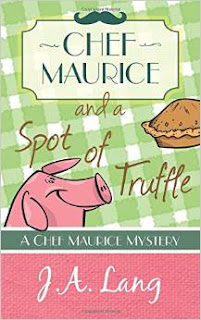 Chef Maurice is the proprietor of Le Cochon Rouge, Beakley, a renowned restaurant nestled in the heart of the Cotswolds.

As A SPOT OF TRUFFLE opens, Maurice is panicking about a missing supplier. Ollie Meadows, the local forager, has disappeared with no forwarding address. Maurice needs his precious champignons for the night's menu, so he breaks in to Ollie's cottage and retrieves his latest finds - a variety of mushrooms including an unexpected trove of expensive truffles.

Maurice's keen chef's nose picks up the earth notes of the English countryside and concludes the truffles are local. Are the nearby Farnley Woods growing on top of a fungal goldmine?

Luckily, Maurice knows how to find out. He visits the local animal sanctuary and comes away with a new pet, miniature pig Hamilton. Hamilton's first hunt in Farnley Woods (for various reasons disguised as a baby) turns up zero truffles, but does locate one dead forager.

Then when Hamilton is stolen, Maurice realises that the police won't pour all of their available resources (PC Lucy Gavistone) into locating his pig until the murder of Ollie Meadows has been solved. With visions of a vanishing truffle menu, he channels his not inconsiderable energies into finding the killer, with a flagrant disregard for propriety or procedure.

The comic timing is excellent, there are some good set-pieces (Maurice interrupting a police interrogation by shouting through a grille is very funny, as is his three-course stake-out menu), and some almost Pratchett-esque one-liners...Alf had “moved to Bleakley from the hamlet of Little Goving, population six. Life in the big village was currently exceeding all his expectations”. And here's Ollie's nosy neighbour: “I could hear them shouting through the walls. Terrible the way sound travels through these walls. Had to turn the telly right down, I did.”

Chef Maurice, monomaniacal about his work, never short of a pastry, and with a tenacious French accent, has the makings of a comic crime classic. Much recommended for fans of Simon Brett or M C Beaton.