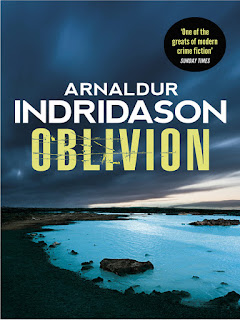 A woman, swimming in a lagoon for her psoriasis, stumbles across a body, starting off a new investigation for Erlendur and his boss Marion Briem. The pathologist confirms although the body seemed, on a first look, to have been severely beaten, in fact the pattern of broken bones suggested that he must have fallen from a great height probably onto a smooth hard surface. But where, and how?
The man was about thirty, no real identifying features, and no one seems to have reported him missing. His clothes all seem to have come from the USA – cowboy boots, jeans, and so on. Bought on a visit? Is he a genuine American? Or, is there some connection with the American military zone on Midnesheidi, where around five or six thousand Americans, including their families, live. A reference to the controversial military base, which was sited in Iceland between 1951 and 2005, after the government made a deal with the Americans concerning Military protection.

After about three days, the man’s sister eventually realizes that the body could be that of her brother’s and then she identifies him. Finally, the investigation can start properly, or can it? The problem is that Kristvin, the murdered man, was an air mechanic, who has some sort of connection with the naval air base at Keflavík. The Icelandair premises where he worked are located inside the military zone. In fact, shortly after he is identified, his car is discovered on the base, with its tyres slashed. Simple enough to perhaps think that he may have met his death there, but the police have no jurisdiction in the military zone, which is controlled by the US Navy. Complicated negotiations with the Americans are needed to allow the Icelandic police to follow up their investigations actually on the naval air base itself.

Meanwhile, Erlendur is pursuing his own investigation in the background, into the disappearance of an eighteen-year-old girl, Dagbjört, as she walked to school past the old barracks where Camp Knox used to be in the Second World War. An old investigation, where many who were around at the time are either dead, or old. And a disappearance that prey’s on Erlendur’s mind, as a man obsessed with the disappeared, many of whom have never been found.

A common theme on the uneasy relationship between the US military and the native Icelanders, clearly highly controversial at the time, wends its way throughout these two main threads of the story. Erlendur is still a junior detective as these latter novels from Indriḋason have returned to the earlier days in this detective’s career. However, he still displays the same knack of uncovering secrets, and seeing beyond the lies and half-truths that people choose to tell him, to get to the truth. And he doggedly obtains small parts of the jigsaw from different people, to piece together the secrets of (in this case) Kristvin’s life and how he met his death. Mixed in is an interesting relationship between Erlendur and Sergeant Caroline Murphy from the US military police, initially mistrustful, but then developing into something more complex as the two investigators decide to work together. Although I sometimes miss the more morose older version of Erlendur, I enjoy these books with the younger Erlendur, and this latest outing, with its insightful reflections on the US-Icelandic relationship is highly recommended.