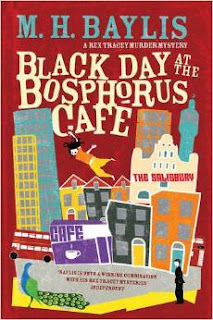 The walkway ended in a dark stairwell. You could go up, to higher levels of the “city”, or down, towards the street, in both cases accompanied by piss and gang graffiti and the mounting fear of encountering someone less scared than yourself.

North London: the seedy part of Wood Green Shopping City.
Rex Tracey, a journalist with the local paper s: Haringey, is following the tag end of the new Labour candidate's meet-and-greet when it happens – the burning girl tumbling from the top floor, colours that will stay with him for months. During the following commotion Rex looks up and catches sight of something near the safety rail. The flash of a face? The mortally injured girl wears a Kurdish PKK T-shirt. A protest? Later, after her body has been shrouded in coats and hastily gathered coverings, Rex is touched by a brooch in the shape of a peacock near her hand. Rex and his photographer colleague Terry try for a few words with the Labour candidate but her posse is defensive. The pair move off, Terry taking a few discrete photos of the scene. They plan to go to the pub but that's an idea interrupted by a phone call from the local planning officer with whom Rex had an appointment about installing windows on the top floor of his garage-conversion home.
Rex is starting to feel the shock of witnessing the girl's death but he takes time to ring a couple of paragraphs through to his editor before hurrying home. The planning officer is waiting by his obviously new BMW, customised plate, and all. What follows is not a good result for Rex. He has entered the nightmare world of Catch-22 regulations. Whilst giving Rex a lift to his next meeting, the planning officer tells him to get some advice. Of course this will be costly says the man, keeping a blank face whilst he points out that Rex has his phone numbers. In his shocked state it takes a while for Rex to figure out that the planning officer had been asking for a bung.
At Turnpike Lane Station Rex finds his next interviewee, a Greek doctor working with the local Cypriot community. And a very attractive doctor she is too. At this point the shock catches up with Rex. He lurches towards collapse and, over a cup of strong tea in the nearby Bosphorus Café, Dr Helena Georgiadis of the “UN War Crimes Unpronounceable Acronym” carries out a desensitisation exercise by making Rex follow her moving finger with his eyes whilst recounting what he saw of the girl's death. It takes several goes before Rex realises that something has settled within him. In the middle of their discussions about the doctor's work with the local Cypriot community and the “Disappeared” of the 1963 and 1974 Cyprus conflicts, the police enter the café. They quietly ask its owner to accompany them into the kitchen and shortly afterwards Rex hears the man's anguished howl. A weeping waitress comes out of the kitchen and asks everyone to leave. It's then that Rex remembers the café owner's pretty daughter – and the peacock brooch she always wore....

In this dramatic beginning of BLACK DAY AT THE BOSPHORUS CAFÉ, the third M.H. Baylis “Rex Tracey Murder Mystery”, nineteen-year-old law student and budding political activist Mina Küçüktürk dies, burning and falling to the floor of Wood Green Shopping City. Everyone assumes that her death is a suicide protest. But after realising that he has known the girl for years, Rex considers the possibility that she did not take her own life. With his beloved “Harringay and Tottenham” undergoing rapid changes under its new council leadership, there is an equally rapid pace of change for hard-pressed journalist Rex, a man held together by painkillers and lager. He has to contend with his paper's new, temporary editor, the imminent transfer of his invalid wife away from the local convent to her sister’s home in Paris and the effect on his libido of one Dr Helena Georgiadis.

M.H. Baylis has wryly described himself as inventing the “urban cosy”. I am not one for polite tales of murder and mayhem set in the English shires but the Rex Tracey series in which Baylis opens up the enclaves and communities of North London and delicately displays their structures and complications against a backdrop of murder and corruption, is just the ticket for a stay-at-home, would-be globe-trotting crime fan. THE TOTTENHAM OUTRAGE, his previous book, was set amongst the Hasidic Jewish community of Stamford Hill. BLACK DAY AT THE BOSPHORUS CAFÉ explores the cafés, shops and factories of the Borough's Kurdish–Turkish community. Skilful, vivid writing and a complex, involving plot set amongst the intersecting worlds of Kurdish identity, war crimes, honour killings and split communities has Rex battling to unravel the motives for a murder (or two) whilst enduring his own increasing emotional chaos. Plenty to read about, plenty to think about and plenty to enjoy.