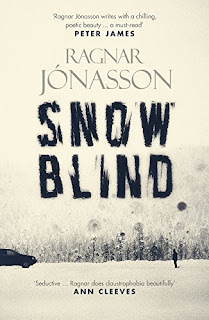 If Arnaldur is the King and Yrsa the Queen of Icelandic crime fiction then Ragnar is surely the Crown Prince...more please!

SNOWBLIND is the first in the Ari Thor series set in Siglufjordur, a small fjord town on the north coast of Iceland. Ari Thor has dropped out of studying first philosophy and then theology but has just completed his police training in Reykjavik. It's 2008 and jobs are scarce so when he is offered a post in Siglufjordur he accepts without discussing it with his girlfriend Kristin.

Ari Thor moves to Siglufjordur, alone in the winter and is soon wondering what he's done. A townie and an outsider in a small place where everyone knows everyone else and there's no crime to speak of. And then the snow starts.

As well as Ari Thor's progression from Reykjavik to Siglufjordur, the narrative, via several points of view, includes the background to a number of the residents of Siglufjordur, most of whom are in the Dramatic Society.

Tragedy strikes the Dramatic Society with the death of one its main members. Ari Thor thinks it wasn't an accident but his boss, Tomas, disagrees and doesn't want to attract lurid stories from the press. A second incident however, leads to Tomas thinking that maybe Ari Thor was correct and that they have a murderer in their midst.

SNOWBLIND is a traditional crime novel with a confined set of suspects - trapped in Siglufjordur by the metres of snow that have fallen – all of whom have secrets. Most of the characters have suffered a loss of family, including Ari Thor, or have had a bleak childhood. Ari Thor does have the makings of a good detective though he appears rather naive and a bit clueless with regards to his girlfriend however is there more to his move to Siglufjordur than just getting a job? The setting of Siglufjordur adds a new dimension with the weather impacting so greatly on the inhabitants and makes a refreshing change from Reykjavik.

I raced through this very enjoyable debut from Ragnar Jonasson and I look forward to catching up with Ari Thor and his colleagues' lives in NIGHTBLIND.
Posted by Karen (Euro Crime) at 3:41 pm