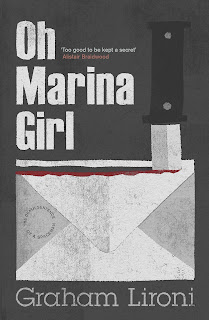 This quirky novel is simply brilliant. Several of the reviews on its back cover say that it is a cult classic in the making and they are not wrong. OH MARINA GIRL is the third novel by Graham Lironi, who is a former journalist and based in Glasgow. He is described as a “bad boy of Scottish fiction’ and is definitely a name to look out for.

OH MARINA GIRL is the narrated memoir of a spaceman – the nameless letters editor of a newspaper, who has had the same job for many years and follows the same routine every day. One morning he is dragged out of his usual pattern by a letter that states “Intolerance will not be tolerated” and threatens to kill a hostage – who had written to the newspaper criticizing a recently published book review and whose views had been printed the day before. The letter goes on to say that unless it is published, unedited, on the front page of the next day’s paper, the hostage will be executed. It also adds that failure to do this will mean that he, the letters editor, will also meet with an unpleasant end.

Our narrator ponders upon what he should do next and tells us a bit about himself and his family history at the same time. He decides to give the letter to his boss, who calls a board meeting and is far from happy, then try and discover the identity of the mysterious letter writer himself. He spends a great deal of time either in the library, talking with people whose names are, weirdly, all anagrams of each other, or meeting with a private detective who seems to be following him but wants to help him as well. It is all beautifully written and impossible to guess what is going to happen next.

I love Lironi’s way with words. He had me captivated and curious right from the start. This wonderful book is very short and a quick read but its impact stays with you for a long time after you finish it. It doesn’t feel like a short, quick read at all. If you like cult classics and books that make you think “eh?”, then you are going to love this one – especially the ending!