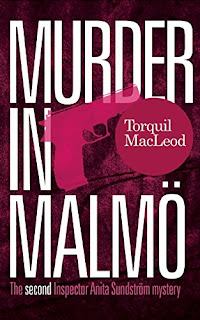 Tommy Ekman, the charismatic head of an advertising agency, is found dead in his shower. With no tangible evidence the suspicion falls first on his employees, and then on his wife Kristina, daughter of the powerful and rich industrialist Dag Wollstad. Tommy’s death has been caused by inhaling gas, similar to what was used in Nazi gas chambers. The discovery is shocking and completely incomprehensible. Soon another prominent Malmö businessman is found murdered, and the investigating team stumbles in the dark, trying to dig into the backgrounds of victims and to connect conflicting motives. A third murder follows…

At the same time a gunman is targeting immigrants in Malmö, shooting to spread the fear, and then shooting to kill. No traces are left but the message is clear and disturbing. The ghost of the King Gustav Adolf, famous for leading Sweden to military supremacy in the seventeenth century, seems to be lurking in background…

However, Inspector Anita Sundström is not allowed to be involved in either of these investigations. Returning to work after her disastrous error of professional judgement (set out in a first novel MEET ME IN MALMO) she is side-lined and sent to track a stolen modern piece of art. That case is more to please the well-connected Commissioner Dahlbeck rather than to seriously find the painting. Anita’s previous protégé is sent to Stockholm so she is teamed with Hakim, a young conscientious but hot headed policeman of Iraqi origin. She feels equally annoyed and motherly towards Hakim but has no say within the boundaries set by her antagonistic boss Chief Inspector Moberg and her colleague and nemesis Inspector Karl Westmark, a particularly unpleasant person, lusting after any attractive woman he sees and chasing after people who could further his career. He would become a caricature; however, MacLeod’s skilful characterisation builds up tension where it is needed and moves the story forward.

I confess I want Inspector Anita Sundström to be my friend. She messes up, kills the wrong man, falls in love with the killer and cannot move on. She’s big on self-pity. Occasionally she disobeys orders. But she definitely wants to do her job to the best of her abilities, and although reluctantly, she can admit that misogynist opportunist Westmark is actually an excellent cop. Only a clever author can create a believable protagonist, flawed and honest.

Fast paced, with a strong plot and full of references to the history of Sweden and geography of Skåne, where Malmö is located, the second novel by Torquil MacLeod is very visual, with a very rich sense of location. Anita Sundström’s stories would make a great TV dramas. I would also recommend it to the fans of the much darker Kurt Wallander’s series: Ystad is not that far from Malmö. Read, compare and enjoy.