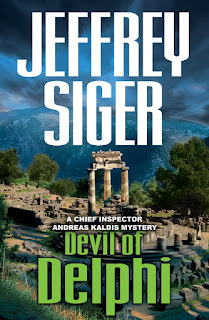 Delphi once stood at the centre of the world, a mountainous, verdant home to the gods, where kings and warriors journeyed to hear its Oracle speak. The Oracle embodied the decree of the gods―or at least the word of Apollo. To disobey risked…everything.

Young Athenian Kharon chooses modern Delphi to rebuild his life among its rolling hills and endless olive groves. But his dark past is too celebrated, and his assassin’s skills so in demand, that his fate does not rest entirely in his own hands. Greece is being flooded with bomba, counterfeits of the most celebrated alcoholic beverages and wine brands. The legitimate annual trillion-dollar world market is in peril. So, too, are consumers―someone is not just counterfeiting booze, but adulterating it, often with poisonous substances. Who is masterminding this immensely lucrative conspiracy?

Kharon learns who when the ruthless criminal gives him no choice but to serve her. Her decrees are as absolute as the Oracle’s, and as fearsomely punished. Kharon agrees, but dictates his own payoff. And his own methods, which allow his targets some choice in the outcomes.

When Kharon unexpectedly shoots a member of one of Greece’s richest, most feared families, he draws Chief Inspector Andreas Kaldis into the eye of a political and media firestorm threatening to bring down Greece’s government.

The author has a light touch and there is a lot of very wry humour in his books to offset the often very dark violence. Siger, spends some time each year in Greece and also time in his other home in the US and is able to comment on the political and economic troubles that have faced Greek society over recent years and reveals some of the creative ways the Greeks have of avoiding personal taxation!

The case is investigated by checking out many different lines of enquiry before reaching the exciting conclusion. There are many twists and turns and assorted red herrings before the end of the story. Of all of the books that he has written, this one, I believe, was the author's best; with so many changes of direction in the fast paced but highly imaginative and tightly plotted story, one could not guess what would happen next.

Chief Inspector Andreas Kaldis is an exciting, intriguing and well drawn creation and we learn a little bit more about him from book to book. The books are all very gripping and whilst they are very evocative of the rustic tourist landscape of Greece, they are also extremely readable examples of the best international police procedurals, similar perhaps to those of authors such as Donna Leon and Joseph Wambaugh. I look forward to reading his next one.