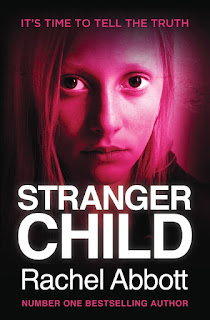 Rachel Abbott's books were all originally published on Amazon Kindle to great success and she sold more books using this medium than any other author. I have just had the pleasure of reading her fourth novel.

Caroline Joseph is driving back to her home with her six-year-old daughter in the child seat at the back of the vehicle when her mobile rings and then shortly after, she sees a car blocking the road. She tries to avoid it but cannot and the car overturns and crashes. The crash regrettably kills Caroline but the daughter, Natasha, mysteriously disappears.

Six years later, David Joseph, the grief-stricken husband of Caroline has since happily remarried to Emma Jacobs and they have a very young baby son, Ollie, and are very contented together. Then one day a stranger walks into their lives and it tilts their world on it's axis as she claims to be Natasha who disappeared after that accident all that time ago. Where has she been during the last six years? Who has been holding her and why hasn't she contacted her Dad to reassure him? Why doesn't she want the police to be contacted? Secretly, Emma contacts her old friend, DCI Tom Douglas, for help...

The extremely well thought out plot of this book carries on from this very promising start but it would be remiss of me to give any more details except to say that some of the characters that are featured in her previous three books also appear in this one.

I found this book, which is both a psychological thriller and also a police procedural incredibly well plotted, I just could not guess what would happen next and the characters are all so well described which made the book very exciting and atmospheric. This is the first of her four books that I have read and I hope to have a look at the others in due course.

The author, who divides her time between the Channel Islands and Italy, used to run an interactive media company with her husband, developing software for the education market, before selling it and eventually retiring in 2005 aged fifty-three. She settled into retirement quite happily until one day when she was snowed in and there wasn't anything else she could think of doing and she had an idea for a book and spent several months writing and editing it. After writing, unsuccessfully, to a number of book agents she decided to publish on-line in 2011 and ONLY THE INNOCENT, her debut crime novel was the result and it became the Kindle number one in November 2011. She went on to become the fourteenth best-selling author on Kindle.

So if you want to read a book that once started you'll find almost impossible to put down then don't delay getting this one.