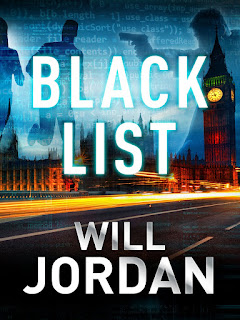 BLACK LIST is the fourth book in Jordan’s Ryan Drake series and is every bit as excellent as his earlier offerings. The tension that is evident in the earlier books is still there, if not more so, and it is a captivating read, right from the very first page. BLACK LIST has been produced by a different publisher to Jordan’s previous Drake books and this is the first one to be available just in e-format. To be honest, I am not a great fan of ebooks, but BLACK LIST is so engrossing that the format wasn’t an issue and I loved it anyway.

The story begins with Alex, a gifted computer expert and failed hacker, standing on the top of a building in Istanbul, dangling a pen-drive over the edge and then, after pondering how crazy his life has become and realizing he has nothing to lose, stepping over it himself.

We then go back to ten days earlier and are filled in on what exactly brought our hero to this point in his life. Alex Yates is down on his luck. Newly released from prison after serving a sentence for being a hacker, he is forbidden from even going near a computer and works in retail. Life sucks. Then his old friend and partner in crime Arran Sinclair gets in touch and says he needs his help with something sensitive. Alex refuses and walks away but a few days later an envelope drops through his door, containing nothing but a pen drive. Worried now, Alex becomes even more concerned when his friend goes missing, presumed dead, and heads to an internet café to look at the contents of the drive. This is when his problems really begin. With armed operatives closing in on the café, Alex is phoned by a mysterious woman with a foreign accent who tells him to run. And so he does…

Will Jordan is a gifted story-teller and his plots keep your imagination running in overdrive. Jordan’s interest in military history and background in IT are very evident in his latest work. His details are authentic and add to the story without becoming overpowering. If you haven’t tried any of this Ryan Drake series yet, then I suggest that you do so. They are a quick read – due to them being so captivating – and are guaranteed to keep you up late because you can’t put them down.